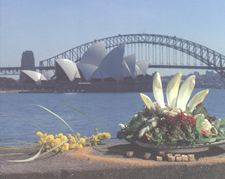 The basis of Australian cuisine was established by the British and then greatly influenced by subsequent migrants: Chinese, Greek, Italian and other nationalities. Of course, an authentic Australian cuisine existed even before the arrival of the British. The Australian Aborigines were the first inhabitants on this continent and they themselves came in numerous migratory waves from the north and north west over a period which is now believed to span over 100,000 years but certainly over 40,000. Their foods were of a high nutritional quality and whenever sufficient energy was obtained through hunting and gathering, the nutrient intake was balanced and adequate. So much so, that it allowed a rich and diverse culture of art, story-telling, dance and song to develop across the 600 tribes present at the time of the British invasion.

The English influence determined the main dishes to be Sunday roasts, grilled chops, stews and other recipes made from meat, which were served with vegetables. For example, mashed potatoes, beans, carrots and peas were among the most frequent vegetable accompaniments.

Until recently, Australian cuisine was described by simplicity and freshness - a poor categorising description since it is similarly used across the Pacific Rim and North America. Chicken Maryland was one of the most difficult recipes in that period. During the last five decades, the number of the nations that affected the Australian cuisine grew, the cooking style improved and the recipes began to be more and more complex. The influences from Italy, Greece, Indonesia and China increased. Although there were many influences over the last 200 years, the Australia of modern times now has some culturally specific dishes, due to the recent commercialisation of selected indigenous ingredients, first pioneered by Vic Cherikoff and several chefs and colleagues in the 1980s. These are unique herbs, spices, fruits, nuts, extracted oils and products made from them and which cannot be found outside the country.

Seafood features largely in Australian cuisine. It is variously prepared and usually served at festivities. The most popular seafood includes coral trout, red emperor, sweetlip, barramundi, oysters, mussels, prawns (shrimp), lobsters, crabs, yabbies and other shellfish and crustaceans. Barbeques are frequent occasions, often held at the beach, backyard or other parts of the 'Great Outdoors', for family meetings, get-togethers with friends and at fundraising activities. The 'sausage sizzle' is one of the major uses of food for fundraising. Whilst it has diminished in popularity lately (due to health awareness), it is a dish made up of barbequed sausages and onions, served on white rolls or bread and usually accompanied by tomato sauce (ketchup). Kangaroo, emu and crocodile meats are three of the ingredients that make the Australian cuisine unique. These meats were used by the aborigines and now are a representative part of the national cuisine.

Some long-standing but 'unique' concoctions which have grabbed common perception as Australian are: Vegemite (a brownish yeast extract commonly spread on bread or toast), Anzac biscuits (biscuits with a high consistency of oats which originate in the World War One period, when they were sent to ANZAC soldiers fighting in Gollipoli; due to their composition they could handle the long trip in the mail from Australia) and Lamingtons (cakes made from day old sponge cake, sometimes with a filling of raspberry jam, then coated in a thin chocolate sauce and dipped in desiccated coconut).

Australia has a very large territory and this is why there cannot be the same cooking style all over the country. As many other countries, Australia can be divided in regions that have a specific cuisine, due to the ethnos that affected each one of them. Every regional cuisine is determined by the cultures that influenced the region and by the local climate. For example, sometimes there is a great difference between the temperatures from the Northern and the Southern regions, and this fact concluded in using specific ingredients.

Australian cuisine has been recently oriented to healthier preparation methods. The dishes should be made from fresh ingredients where possible. For example, the meat must not be fried in a lot of oil and vegetables should be lightly cooked or steamed. Preserving the colour of vegetables gives dishes a better look. Also, it is recommended not to use much salt.

The cooking methods of the Australian Aborigines were very simple. They were primarily hunter-gatherers and many of their dishes were based on meat. Baking in the ashes, steaming in a ground oven and boiling are some techniques that date from that period. British settlement brought a greater variety of ingredients and broader methods of cooking

Most Australian dishes don’t require you to purchase any special equipment. However, having a coffee grinder helps with roasting and grinding spices and maximizes their volatile oils, which, in turn, provides your food with more flavour. The cooking equipment used in Australia is mainly the same as the common tools which exist in every kitchen. This equipment consists of trays, pots and pans, standard cooking utensils, food containers, scales, cups and/or spoons for measuring the ingredients, can openers and so on. As is seen around the world, the number of tools has increased dramatically since the time of the early settlers and the native uses by Australian Aborigines.

A lot of Australian recipes are devised for the traditional barbeque, colloquially known as the 'barbie', which is used outdoors and generally consists of a grill and a hot plate and is powered by gas. Very often the barbeque is also used as a means of roasting larger pieces of meat under a large, often dome-shaped, lid.

Another piece of equipment often used in Australian cuisine is the camp oven. This is usually a large, cast-iron pot with a lid and handle, the contents of which are cooked in a hole in the ground which is filled with hot coals underneath, around and over the camp oven.

Early Australian Aboriginal food festivals include the Bunya Festival and the Bogong Moth Festival. These festivals were mainly seasonal and based on the plentiful supply of certain native food types at certain times of the year. However, they also acted as a gathering of the tribes. Nowadays, festivals are organised to celebrate different food and drinks, from wine and beer to beef and chilli sauce. The most important food festivals in Australia are: ‘Tastes of Prom Country' Food and Wine Festival, Melbourne Food and Wine Festival, Hot Sauce and Fiery Foods Festival, Fine Food Queensland, Beef Australia, Australian International Beer Festival, Casino Beef Week, Good Food and Wine Show. Some of them are planned each year while others are organised periodically. Each regional cuisine has its foods and its festivals. These events are good occasions for the Australian chefs to prove their experience and to show new methods of preparation.

Retrieved from "https://recipes.fandom.com/wiki/Australian_Cuisine?oldid=753549"
Community content is available under CC-BY-SA unless otherwise noted.