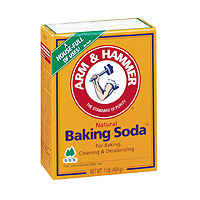 Sodium bicarbonate NaHCO3, or sodium hydrogen carbonate, also known as baking soda and bicarbonate of soda, is a soluble white anhydrous or crystalline chemical compound, with a slight alkaline taste resembling that of sodium carbonate. It is found in many mineral springs and also produced artificially.

A leavening agent, activated by interacting with something acid. Liquid ingredients like sour milk, sour cream, buttermilk, yogurt, molasses, and lemon juice help baking soda produce the gases which in turn make a batter rise. The batter should be baked as soon as possible after the liquid has interacted with the baking soda.

It is also used as an antacid to treat acid indigestion and heartburn. The anhydrous form is also used to absorb moisture and odours; an open box can be left in a refrigerator for this purpose. Additionally, a paste from baking soda can be very effective when used in cleaning and scrubbing. Used in toothpaste, baking soda helps to gently remove stains, whiten teeth, and freshen breath. Baking soda helps remove body odours as it absorbs chemicals, apply using a powder puff.