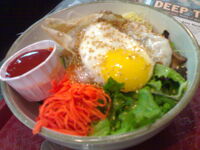 Bibimbap is served as a bowl of warm white rice topped with sauteed and seasoned vegetables, beef, a fried egg, and gochujang (chile pepper paste). The ingredients are stirred together thoroughly just before eating. It can be served either cold or hot.

Vegetables commonly used in bibimbap include julienned cucumber, zucchini, carrot, mu (white radish), mushrooms, doraji (bellflower root), and laver, as well as spinach, soybean sprouts, and gosari (bracken fern stems). Dubu (tofu), either plain or sauteed, or a leaf of lettuce may be added, or beef may be substituted with chicken or seafood. Many areas of Korea typically serve a vegetarian version of the dish which may well be the more traditional alternative.

A variation of this dish, dolsot bibimbap (돌솥 비빔밥, "dolsot" meaning "stone pot"), is served in a heated stone bowl, in which a raw egg is cooked against the sides of the bowl. Before the rice is placed in the bowl, the bottom of the bowl is coated with sesame oil, making the layer of the rice touching the bowl golden brown and crispy.

The city of Jeonju, the capital of the North Jeolla Province of South Korea (located about two and a half hours' drive south of Seoul) is famous throughout the nation for its version of bibimbap, said to be based on a royal court dish. 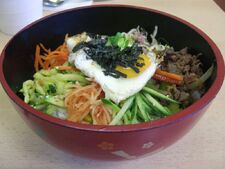