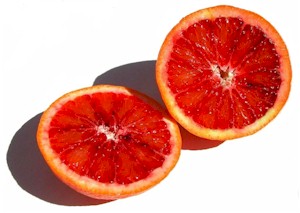 The blood orange is a variety of orange which is as well called Citrus sinensis, with crimson, blood-colored flesh. The fruit ranges from small- to medium-sized; its skin can be pitted or smooth. Blood oranges are juicy, sweet and have a dark red interior and are slightly less acidic than regular table oranges . Originally from Sicily the blood orange has gained in popularity in the US and can be found fresh or in juice form in many grocery stores. Blood oranges hold a pigment called anthocyanin which is not naturally found in citrus but rather more common in other red fruits and flowers. Blood oranges are great for juicing and using as you would universal orange juice. The dark red color of the juice makes it a good cocktail constituent. Fresh blood orange segments are used in salads, sauces, sorbets, granites and compotes. From Spanish blood oranges are normally made a special English marmalade. Around the world are three types of blood oranges, the Tarocco which is native to Italy, the Sanguinello which grows in Spain, and the Moro, which is the latest of the three and is developed in San Diego, California.

Retrieved from "https://recipes.fandom.com/wiki/Blood_orange?oldid=554709"
Community content is available under CC-BY-SA unless otherwise noted.