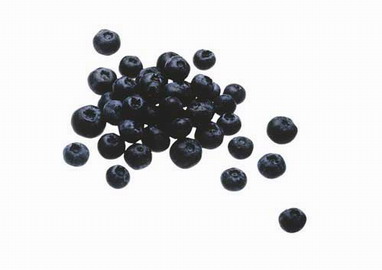 Wild blueberries are smaller in size compared to their cultivated cousins. Blueberries have a protective light powdery coating on the skins and tend to last longer than other berry varieties. Nearly half of the cultivated blueberries grown are sold as fresh blueberries. Fresh blueberries are available for nearly eight months of the year from producers across the United States and Canada. North America is the world's leading blueberry producer, accounting for nearly 90% of world production at the present time. The North American harvest runs from mid-April through early October, with peak harvest in mid-May—August.

The blueberry is a plant which produces edible fruits which belongs to the Vaccinium genus and it is a part of cyanococcus family. There are numerous species of blueberries but the most common are the wild blueberries which have a high content of antioxidants which are known to reduce the risk of cancer illnesses. The studies on blueberries have also revealed that they have some components which prevent brain degradation like in Alzheimer disease and they also prevent urinary tract infections. Beside their numerous medicinal benefits, blueberries are very taste and they are used in preparing jellies, jams, pies and other sweets and delicacies, but they can also be eaten raw.

In general, berries should be dry, firm, well shaped, and eaten within a week after purchase. If you can’t eat them that soon, remember that berries freeze well! It’s best to buy berries that are ‘in-season’ as they’ll cost less and are more ripe and flavorful than ‘out-of-season’ berries.

Select blueberries that are firm, dry, plump, and smooth-skinned. Berries should be deep-purple blue to blue-black; reddish berries aren't ripe but can be used in cooking.

After purchasing berries, check the fruit and toss out any moldy or deformed berries. Immediately eat the overripe berries within 24 hours. Return the other berries back to the original container or they should be arranged unwashed in a shallow pan lined with paper towels, and washed just prior to use. The berries may be topped with a paper towel to absorb any additional moisture. Plastic wrap the entire container. This will ensure the fruit retains its freshness, but generally berries should be eaten within one week.

Because berries have a short shelf life, an alternative to enjoy them year round is to buy them fresh and freeze them yourself. The secret to successful freezing is to use unwashed and completely dry berries before placing them in a single layer on a cookie sheet in the freezer. Once the berries are frozen, transfer them to plastic bags or freezer containers. Frozen berries should last approximately ten months to one year.

When you’re ready to use the berries, go through the lot once more to sort out any undesirable fruit. Then, rinse, drain, and pat dry the fruit. Commercially frozen berries do not need to be ‘cleaned’ or thawed. If you froze your own berries, a quick rinse may be necessary.

Retrieved from "https://recipes.fandom.com/wiki/Blueberry?oldid=554387"
Community content is available under CC-BY-SA unless otherwise noted.