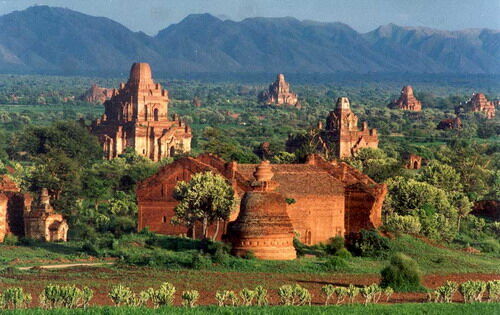 Burmese cuisine is actually the cuisine of Myanmar, as this is the name of the former Burma. It has gathered, in time, influences from India, China and Thailand. It must be noted that the Burmese only used concepts from these cuisines for inspiration. They have traditional cooking methods and dishes of their own. Hence, Burmese cuisine has its own identity.

Burma was under British domination until 1948. Britons might be responsible for some elements of the Burmese cuisine, but the strongest influences come from the Asian countries. Soups and main courses are prepared in a Chinese way; the spices are Indian-like and in some dishes even American and European concepts can be seen.

People have adapted these ideas to local environments and to local tastes. They have created variations of the Chinese and Indian dishes by adding or removing ingredients and by using certain techniques.

Nearly 80 percent of the population is involved in agriculture. Of course, this fact determined the Burmese cuisine to have a certain orientation. Vegetables are rice are used in high quantities.

In other countries, Burmese cuisine is considered to be attractive, because of its exotic look and taste.

The cities from the coast use predominantly seafood in their dishes, while the non-coastal cities have dishes based on land animals. This fact determines the existence of two cuisines.

The Burmese prepare their foods either on charcoal braziers or on brick fireplaces. The preparation methods may not be unique, but the manner in which the dishes are served distinguishes the Burmese cuisine. People have certain eating traditions. For example, they take meals on low tables, while laying on floor mats. The foods are brought all at the same time and there seems to be no order. The Burmese like to present their food and to enhance the visual effect produced by it. Although in the cities people have started to use forks, knives and other such utensils, most of the people choose to use their hands when eating. how to cook shwechi traditional food

A sign of the Indian influence is the usage of spices, in large quantities. Hence, having a coffee grinder helps with roasting and grinding spices and maximizes their volatile oils, which, in turn, provides your food with more flavor. Besides the usual tools, people could use a dictionary to find out what a certain ingredient is. The Burmese have begun to use the utensils that modern world uses. However, they have an equipment of their own. Portable charcoal braziers are usually used instead of stoves. The wok – a heavy iron pan with two handles – remains irreplaceable by the Western pots and pans. Other tools used in the Burmese cuisine are: stones for grinding – usually big and even, mortar and pestle, sieves, spatulas made from wood or bamboo, colanders, cleavers and knives, skewers and ladles. In time, the Western civilizations will try to replace all of these tools, but they must be aware that a Burmese traditional food can be prepared only with traditional tools.

Here are a few kitchen utensils you might want to use:

Most of the festivals in Myanmar are cultural and religious. Buddhism spreads all-over the country very fast and people organize festivals to celebrate the return of Buddha from heaven, for example. The festival dates are established depending on the lunar calendar. The full-moon days represent the peak of the festivals. Food festivals aren’t common and have begun to be organized in order to promote the tourism.