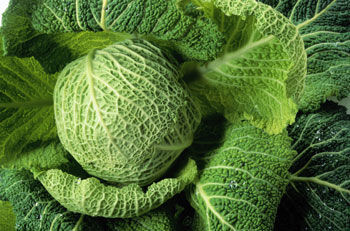 Cabbage, one of the oldest vegetables, continues to be a dietary staple and an inexpensive food. It is easy to grow, tolerates the cold, and keeps well. Cabbage is an excellent source of Vitamin C.

White cabbage is the most common cabbage in North America, and perhaps the single greatest reason for making an entire continent uninterested in cabbage. White cabbage was actually really developed for sauerkraut. It wasn't meant to replace other cabbages in other dishes. But in North America, the white cabbages became popular with producers and retailers because they store -- well, basically forever.

The cabbage (Brassica oleracea Capitata Group) is a plant of the Family Brassicaceae (or Cruciferae). It is herbaceous, biennial, and a dicotyledonous flowering plant with leaves forming a characteristic compact cluster. This so-called 'cabbage head' is widely consumed — raw, cooked, or preserved — in a great variety of dishes, and is thus a leaf vegetable.

The cabbage head was bred into the species from the leafy wild plant, found in the Mediterranean region around 100 AD. The English name derives from the French caboche ("head"). Varieties include red cabbage and savoy cabbage.

Chinese cabbage, while resembling cabbage, is an independent development from a different Brassica species. Kerguelen cabbage is yet another unrelated species.

Look for solid, heavy heads of cabbage. Avoid cabbage that has discolored veins or worm damage. Do not buy precut cabbage, the leaves may have already lost their vitamin C. Look for stems that are healthy looking, closely trimmed, and are not dry or split.

Do not wash cabbage until you are ready to use it. Avoid slicing or shredding cabbage in advance. This will cause it to lose some of its vitamin C content. If you must prepare it an hour or more in advance before cooking, place it in a plastic bag, seal tightly, and refrigerate. 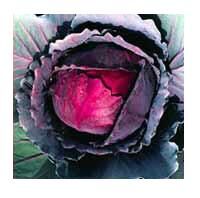 There are at least a hundred different types of cabbage grown throughout the world, but the most common types in the United States are the Green, Red, and Savoy varieties. Chinese varieties are also available. The two most common types of Chinese cabbage are Bok Choy and Napa cabbage. Chinese cabbage cooks in less time than standard U.S. types, but can be prepared in the same ways. Cabbage can be steamed, boiled, braised, microwaved, stuffed, or stir-fried.