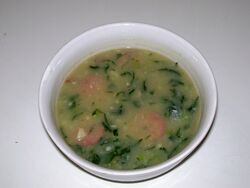 Okay, this cooking version is for the crockpot overnight (~8hours), then awake in the cold morning to YUMMY food ready to eat. It wasn’t originally, as you can make it faster cooking it all in a regular pot (~1hour) or you can make it semi-faster pre-cooking the major parts and then putting them all in the crockpot (~4hours). Jon, in RI

Retrieved from "https://recipes.fandom.com/wiki/Caldo_Verde_Jon%E2%80%99s_Style?oldid=561261"
Community content is available under CC-BY-SA unless otherwise noted.