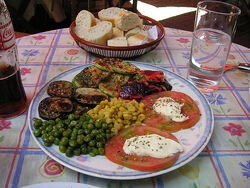 One of the most traditional Uruguayan appetizers is represented by the stuffed zucchini, called in Spanish zapalitos rellenos. The beef is the most important meat meal, but there are also a lot of kinds of sausages: the barbeque is a very complex and rich meal, made of the traditional sausages called chorizo and morcilla. One of the most consumed salads is the ensalada rusa (Russian salad), which is made of potatoes, English peas, carrots and sometimes mayonnaise is added. The Uruguayan soups tend to be very consistent and stodgy, as they include many aliments, such as meat (sometimes fat meat), vegetable, pastes, spices and animal fat. Chajá is a local favorite, consisting of a sponge cake with jam and cream. The floating Island dessert is made of a custard sauce of eggs, sugar and milk and custard with lemon rind. Vegetarians eat Uruguayan salads, fried veggies and milkless and eggless pastas.

Here are some popular Uruguayan recipes to try: