Celeriac (Apium graveolens Rapaceum Group) (also known as 'turnip-rooted celery' or 'knob celery'), is a specially selected Cultivar Group of celery, grown as a root vegetable for its large and well-developed taproot rather than for its stem and leaves. The root is used when it is about 10–12 cm diameter, or the size of a large potato. Celeriac may be used raw or fresh. It is best to peel celeriac before use, since the outer skin is tough and stringy. It has the celery flavor, so it is often used as a flavoring in soups and stews; it can also be mashed or used in casseroles and baked dishes. The hollow stalk of the upper plant can be cut into drinking straw lengths, rinsed out, and used for tomato drinks such as the Bloody Mary. The tomato juice moving through the stalk is lightly permeated with the celery flavor.

It is not as popular as it might be, especially in the western hemisphere, very possibly owing to its garish appearance before cleaning: it has been described as "a vegetable octopus", owing to the tangle of unsightly rootlets that grow at the base.

There are numerous cultivars available, especially in Europe, where root vegetables are popular. Among the types are 'Prinz', 'Diamant', 'Ibis', and 'Kojak', which all received Royal Horticultural Society Award of Garden Merit designation in the year 2000 trials.

Celeriac has good keeping properties, and should last 3 to 4 months if stored between 0° and 5 °C and not allowed to dry out.

It can be one of the greatest dieting tools, because it makes a very good mash and has very low carbohydrate quantities.

Part of the celery family, the celery root or celeriac, is routinely used in French cooking and is seen throughout Europe. It is solely grown for its root use and appeared in the United States beginning in the 19th century.

This root is bypassed by many because of it unusual appearance of crevices and rootlets. When cooked well, this root evokes celery and parsley flavors. 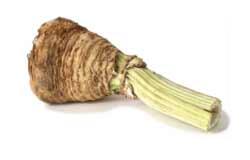 Celery roots are available year-round with a peak during November through April. Select roots that are the least knobby or ones that have the smoothest skin (for easier peeling). Medium roots tend to be smoother and harder and these roots can be sold with or with out the celery tops. If you do buy the roots with the tops, trim the stalks and save them for soups and stews. The roots should be wrapped in plastic, stored in the refrigerator, and used within a week. Celery roots must be scrubbed, trimmed at the top and bottom, quartered, and then peeled before eating. Be sure to discard any spongy parts. Avoid overcooking celery root as it will go quickly from firm to mushy.