Cherries are drupes, or stone fruits, related to plums and more distantly to peaches and nectarines. They have been enjoyed since the Stone Age-pits were found in several Stone Age caves in Europe. The Romans carried cherries throughout Europe and England along the routes of conquest.

A cherry is both a tree and its fruit belonging to the family Rosaceae, genus Prunus together with plums, peaches, apricots, almonds and bird cherries. The cherries are member of subgenus Cerasus that can be distinguished from the other genus because its flowers are in small corymbs of several together and the fruit is smooth. The cherries that are chosen for eating belong to Wild Cherry and the Sour Cherry or Morello Cherry, that are used in jam making, cooking and not only. Both of these species originate in Europe and western Asia. It is well known that cherries have lots of health benefits as they contain anthocyanins that are the red pigments in berries that reduce inflammation and pain. More than this, cherries have a great amount of melatonin which is extremely important for the function of the immune system. Sweet cherries that are cultivated especially in California are common in the East and some species are cultivated for their flowers. Cherries are extremely popular all over the world and they are used in jams, fruit salads, ice-cream, juices, or eaten fresh.

There are two main types of cherries: sweet and sour. Sour cherries are lower in calories and higher in vitamin C and beta carotene than sweet cherries.

This variety is the best known sour cherry. It is mostly canned or frozen for use as pie filling or sauce. They are grown mostly in the eastern and Midwestern states

This variety is the best known sweet cherry. It is large, round, extra-sweet and has a purple-red flesh and a deep red skin that is close to black when fully ripe. The Bing is available from the end of May until early August.

This variety is the second most popular sweet cherry. It is smaller than the Bing and is more heart shaped. It has a dark-red skin and a rich flavor. Lamberts are available a bit longer than the Bing, usually until the end of August.

This variety is sweet with a yellow or pinkish skin. It is milder and sweeter than the Bing. However, this variety is grown in limited quantities.

This variety has a blush-yellow skin and is often canned or made into maraschino cherries. 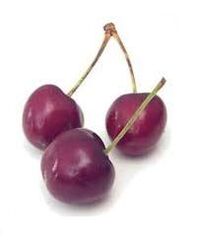 Buy cherries that have been kept cool and moist, as flavor and texture both suffer at warm temperatures. Cherries have a limited growing season and any fresh cherries grown in the United States sold after August probably came from cold storage. Small quantities of sweet cherries are imported from New Zealand during the winter months, but these may be difficult to find.

At the market, pick a handful of cherries at a time and only select the best fruit. This may be time-consuming, but the reward will be better cherries. Good cherries should be large (one inch or more in diameter), glossy, plump, hard and dark-colored for their variety. Buy cherries with stems on — they should be fresh and green. Reject undersized cherries or those that are soft or flabby. Avoid fruit that is bruised or has cuts on the dark surface.

If you find many damaged fruits at the market, consider buying cherries somewhere else, as a number of spoiled cherries will start the others to decay.

Loosely pack unwashed cherries in plastic bags or pour them into a shallow pan in a single layer and cover with plastic wrap to minimize bruising. Store cherries in the refrigerator and cherries in good condition should last up to a week. Check the fruit occasionally and remove the cherries that have gone bad. Wash the fruit before eating.

You can freeze cherries by rinsing and draining thoroughly, spreading them out in a single layer on a cookie sheet and placing in the freezer overnight. Once the cherries are frozen, transfer them to a heavy plastic bag. The frozen fruit may be kept up to a year.

Most cherries bought at the market are eaten raw, alone or accompanied by other fruits. Simply wash the fruit and serve with the stems.

For cooking, pit cherries either by hand or with a pitter. Poaching is the most common form of preparation. Drop cherries into a small amount of simmering water, or a combination of water and wine, and cook for one to three minutes until soft. Poach using the formula of one cup liquid to two cups cherries.

Retrieved from "https://recipes.fandom.com/wiki/Cherry?oldid=617426"
Community content is available under CC-BY-SA unless otherwise noted.