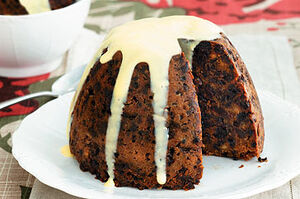 Christmas pudding is the dessert traditionally served on Christmas Day in the United Kingdom (especially England) and some other Commonwealth countries such as Australia, New Zealand and Canada. It is sometimes known as plum pudding, though this can also refer to other kinds of boiled pudding involving a lot of dried fruit.

The pudding needs to be made and cooked well in advance, to allow the flavours to mix (and to save the cook labour on Christmas Day); it is merely reheated when it is to be eaten.

The following is a Sussex recipe for Christmas pudding that is known to have been in annual use for over 50 years without a break, and is believed to have been used largely unaltered since the late nineteenth century, despite the difficulties in gathering the ingredients during the rationing in force in the UK in two world wars. All measurements are in imperial units (with metric measurements in brackets), generally meaning that volume measurements are 20% larger than with the Queen Anne units used in the USA. Originally, twice or even four times these quantities would have been made.

Retrieved from "https://recipes.fandom.com/wiki/Christmas_Pudding?oldid=695048"
Community content is available under CC-BY-SA unless otherwise noted.