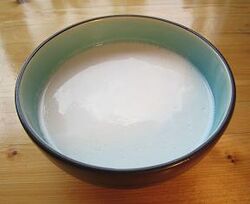 Coconut milk is a sweet, milky white cooking base derived from the meat of a mature coconut. The colour and rich taste of the milk can be attributed to the high coconut oil content and coconut sugars. The term "coconut milk" does not refer to the watery liquid found inside the nut; this is called "coconut water" or "coconut juice."

Coconut milk is a common ingredient in many tropical cuisines, most notably that of Southeast Asia (especially Thai, Singaporean. Malaysian, and Sri Lankan), West African, West Indian, and Polynesian cuisines. Coconut milk can usually be found in the Asian food sections of supermarkets either frozen or canned. Frozen coconut milk tends to stay fresh longer, which is important in dishes where the coconut flavor is not competing with curries and other spicy dishes.

Depending on the brand and age of the milk itself, a thicker, more paste-like consistency floats to the top of the can, and is sometimes separated and used in recipes that require coconut cream rather than coconut milk. Shaking the can prior to opening will even it out to a cream-like thickness.

Coconut milk is the base of most Thai curries. To make the curry sauce, the coconut milk is first cooked over fairly high heat to break down the milk and cream and allow the oil to separate. The curry paste is then added, as well as any other seasonings, meats, vegetables and garnishes.

Open cans of coconut milk must be refrigerated, and are usually good for a few days. Never leave an open can at room temperature, as the milk can sour and spoil easily.