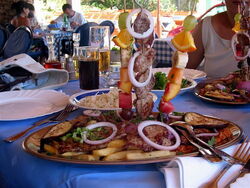 The cuisine of Croatia is known to be very diverse, as there are many cooking styles, throughout the country. The traditional dishes that are prepared by the Croatians have very old origins. The ingredients and the preparation techniques used by the people that live in the mainland Croatia differ from the ones that are practiced in the coastal regions. Many influences can be observed in the Croatian cuisine. For example, the mainland areas have been affected by the Slavic nations, as well as by the Hungarian, Austrian and Turkish cuisines, while the coastal areas present influences of very old civilizations, such as Greeks, Romans and Illyrians. Also, there are dishes that resemble of the Italian and French cuisines.

The Croatian dishes are mostly based on meat, either Pork or game meat, such as rabbit, cheese, poppy seed. These are foods that have Hungarian origins. Also, the wine resembles of the Hungarian cuisine. The Turkish influence is felt in the great amounts of spices that are used, meat that is enhanced with onions and loaded with garlic. Austrians affected the Croatian cuisine and the influence can be seen in dishes that contain cabbage and in breaded dishes or dessertsthat is served at the breakfast. It is made of cheese, fish and bread. The dairy products also are important for the Croatians. such as: strudel, donuts, cream puffs and cakes that contain walnut cream.

A traditional meal in Croatia features dishes that are based on potatoes, rice, corn, meat or fish. Marenda is a traditional dish

The influences that were adopted by the Croatian cuisine are numerous. Due to the high number of the countries that affected the traditional cuisine of Croatia and to the relief which differs from one zone ton another, each region of the country has developed a certain cooking style. This variation is also determined by the ingredients that can be used by the local people, in order to prepare the foods. For example, most of the meals of the people that are located in the coastal region of Croatia are based on fish and seafood. Potatoes and cabbage represent the essential ingredients for another region of the country, while the cuisine of the third region is based on soups and dairy products.

One of the preparation methods that make Croatia unique is used when preparing the goat cheese named paski-sir. This cheese is only prepared on the island of Pag. The cheese is turned over in ashes and olive oil, before being ready. Furthermore, it can be marinated. Other techniques that are frequently used are smoking and drying. This way the Ham is prepared. Besides these, people can make use of various preparation techniques that range from seasoning salting and stewing to boiling, frying, baking and roasting. However, each ingredient that is added to a dish can undergo one of the methods that are mentioned above.

Most Croatian dishes don’t require you to purchase any special tools. However, having a coffee grinder helps with roasting and grinding spices and maximizes their volatile oils, which, in turn, provides your food with more flavor. The cooking equipment that can be found in a typical kitchen from Croatia does not differ by any means from the cooking equipment that is used on the rest of the continent. The utensils that are used for preparing, serving and storing foods ranges from kitchen knives, forks, teaspoons and tablespoons to food scoops, food containers, boxes for the spices, pans, pots, trays, bowls, food portioning devices, graters, grinders and devices for measuring the weight of the ingredients and the temperature. For precise cooking it is better to use food scales to determine the exact amounts of each ingredient that is added to a dish. Also, kitchen thermometers are used to measure the temperature at which the dishes are cooked. This way, people know certainly the time in which the dishes are ready to be served and avoid overcooking.

Traditional dishes are honored by people from Croatia. They organize festivals to celebrate their national foods and beverages. One of the most significant events that is related to the Croatian cuisine is named Gastronomy and Tourism Days and is hosted by Zagreb, the capital of Croatia. Other important events are: International Food Fair, which is also organized in Zagreb and Vinovita. This first one features many other countries that want to promote their best foods, while the second one focuses on wine.

Also, the holidays are very important and there are certain dishes that are related to the most important days. The chefs and the ordinary people take advantage of these events to display their newest manners in which they prepare the dishes.

Retrieved from "https://recipes.fandom.com/wiki/Croatian_Cuisine?oldid=677507"
Community content is available under CC-BY-SA unless otherwise noted.