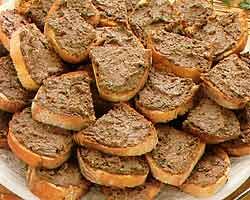 There are several definitions for crostini the first meaning little toasts in Italian, crostini are small, thin slices of toasted bread, which are usually brushed with olive oil. 2nd The word also describes canapés consisting of small slices of toast with a savory topping such as cheese, shrimp, puts or anchovies. 3rd Sometimes crostini refers to the equivalent of a crouton used for soups or salads.

Retrieved from "https://recipes.fandom.com/wiki/Crostini?oldid=498097"
Community content is available under CC-BY-SA unless otherwise noted.