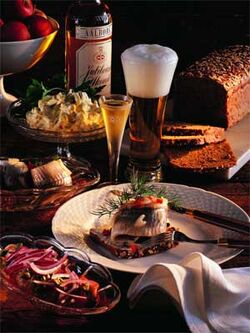 The cuisine of Denmark is rather homogenous. The cooking style of the Danes was affected in time by many nations, but this fact has not determined great differences from one region of the country to another. A northern region of Germany was a long time ago under the domination of the Danes. Many people that have Danish origins still live in that region and this explains the strong influence of Germany. Another fact that determined the Danish cuisine to act as a whole is the importance that is given to the traditional foods. People like more to consume the national dishes, rather than importing ingredients to prepare new foods.

However, recently a difference between the traditional and the modern cuisine of Denmark can be noticed.

New Danish Cuisine/ New Nordic Cuisine: As you see it in the restaurants "Noma" and "Geranium". The idea is to create dishes with ingredients from the local region.

The cooking style of the Danes was affected in time by many nations.

Kåldolmere: The Jewish people introduced this Mediterranean dish to the Danes. Since we don´t have the climate to grow wine leaves, we use cale.

The preparation techniques that predominate are smoking and pickling. The foods that are prepared in this manner preserve better in time and as the fresh fruits and vegetables lack from most of the dishes, these preparation methods are preferred by people from Denmark. Of course, the other cooking techniques, such as boiling, baking, frying, roasting, salting, seasoning and drying, are used, too. Each dish involves the use of one or more of the techniques mentioned above. Furthermore, the ingredients that are added to a dish may undergo several processes.

Most Danish dishes don’t require you to purchase any special tools. However, having a coffee grinder helps with roasting and grinding spices and maximizes their volatile oils, which, in turn, provides your food with more flavor.

Rullepølsepresse: If you want to make a "rullepølse".

Æbleskivepande and knitting needle: If you want to make "æbleskiver".

Apart from that, danish dishes don’t require you to purchase any special tools.

Easter Lunch (Påskefrokost): You start with the fish, different kind of raw marinated herrings, gravad and smoked salmon on white bread, smoked eel with scrambled eggs and chives continue with a variation of warm and cold dishes that goes well with rye bread. and finish with a variation of different cheeses with crackers, white bread and rye bread and fruits. You eat for several hours only interrupted by laughing, talking, drinking beer and snaps and of course saying a lot of "skål". Not so funny if you are the designated driver....

Soup, roast and ice cream (Suppe, steg og is): A traditional food concept that all Danish with traditional families know. Variations of this menu have been served for decades. Luckily people are getting bolder and more ready to try something new.

Det kolde bord is based on cold served dishes. Herring is most likely the ingredient of the first dish that is served at this meal, although most of the types are based on meat.

Retrieved from "https://recipes.fandom.com/wiki/Danish_Cuisine?oldid=750798"
Community content is available under CC-BY-SA unless otherwise noted.