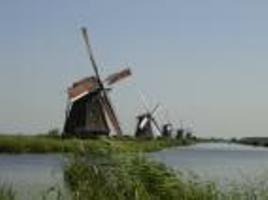 The beauty of Dutch cooking is that it integrates cultures directly into time-honoured recipes. You may view the Dutch as a culture of potatoes and cheese, but with influences of Oost Indië (Indonesia), it is not a strange thing to see nasi goreng and Bami Goreng as much a part of staple cuisine as something "patently Dutch". Of course, the flavours have been adapted to suit Dutch tastes, but the dishes are firmly based in Indonesia and Italy. In later years, the influences of Surinam, Turkey, Northern Africa and the Ass were added to this mix, creating such wonderfully "Dutch" dishes as Roti, Shoarma and Couscous. Many of these dishes are now just as staple as Hutspot or Stamppot. These adaptations and ability to incorporate new and "foreign" things is what gives the Dutch the ability to create dishes that will surprise you, and you will find something to your liking even if you feel the "Dutch food" off post cards isn't to your liking.

Please note: a lot of Dutch dishes are intrinsically linked to cold months of the year because of the nutritional content and festive customs. 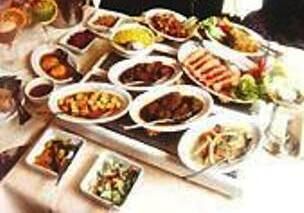 The Dutch generally eat three meals a day consisting of two cold meals and one hot meal. For breakfast and lunch people usually have bread. There are many varieties of bread. It can be a sandwich with 'hagelslag' which are chocolate sprinkles on the bread or jam, or cheese. 'Muisjes', which are similar to hagelslag, but made from aniseed with a sugar coating, are used to celebrate birth of a child - blue and white muisjes for a boy, pink and white for a girl. They are traditionally served on another Dutch breakfast specialty; beschuit. There is also a popular breakfast cake called 'ontbijtkoek'.

Lunch usually consists of more bread. Rather popular is the 'uitsmijter' which is two slices of bread topped with Ham, cheese, and a (runny) baked egg. Bread rolls with herring or tuna salad are popular as well.

Dinner, usually served around 6 p.m., is the traditional hot meal of the day. If you ever looked at 'De aardappeleters', a famous painting by Vincent van Gogh, you should have guessed what is the main ingredient in old-fashioned Dutch dinners, and yes, 'aardappeleters' literally translates to 'potato eaters'. Potatoes are popular and usually accompanied by a serving of cooked meat (or fish) and a serving of additional boiled vegetables.

Soup is preferred as a midday or evening meal or as an entree. Split pea, tomato, or curry soup are favorites. Dutch split pea soup is full of fresh winter vegetables and chunks of Ham hock, or smoked Ham. The Dutch have a unique way of checking whether a split pea soup has turned out good or not - stick an upright spoon into it and if the spoon remains upright, then it is perfect.

It is important and customary to wash your hands before eating and appear timely at the dinner table so dinner can be eaten with the entire family (the resulting family-time is usually regarded as pretty much integral to family structure).

It is considered impolite to start eating before anyone else. Guests are served first, but the host or hostess always takes the first bite to begin the meal at formal dinners. At informal settings everyone waits for the plates to be filled, says 'eet smakelijk' ("Enjoy your meal") and tucks into their dinner. Another point is that one should never leave the table until all have finished eating. A bathroom trip mid-dinner is considered to be very rude by many. 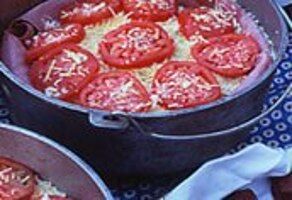 If you have the chance to visit the Netherlands, you should not miss their many wonderful flavors of vla (custard). The thick, sweet pudding made mainly from milk is available in various favors: vanilla, chocolate, strawberry and various combinations of those. Don't forget to try hopjes-vla and bitterkoekjes-vla. They all have unexplainable tastes which will always remind you of the uniqueness of the country. A 'vlaflip' is considered to be a special combination as it is a layered dessert consisting of a dollop of syrup, covered by a layer of custard and that covered by a layer of yoghurt (all layers are not to be mixed before serving).

'Poffertjes' are tiny pancakes, traditionally served directly out of the pan with a little cube of butter melting over them and completely covered in icing sugar. You can get them at a 'poffertjeskraam' (poffertjes kiosk or eating house, usually encountered near shopping centers during the fall and winter seasons) to have them made for you. You can also make them at home of course using a special pan. Sites like [www.typicaldutchstuff.com typicaldutchstuff] provide Dutch cooking equipment such as a 'poffertjes-pan'. You could improvise this as well although the results will not be as assured.

There is also 'drop' which is licorice available in various forms and tastes (salty and soft, nuts - name it and do it probably exists).

'Stamppot' which is mashed potatoes with various vegetables such as carrot, kale or endive and served with a juicy and mild Sausage is common. Kroket, frikadel, 'stroopwafel' (a unique snack made from two thin waffle-style wafers with special caramel filling) and 'vlaai' (a pastry or a sweet pie with fruit filling) are also available.

'Patat' are thick french fries served in paper cone commonly topped with a dollop of mayonnaise or 'patat met' and sometimes in combination with curry, ketchup and chopped onions which is called 'Patat Speciaal'. Another sauce combination is 'patat oorlog' which is saté sauce and mayonnaise with or without chopped Onion.

Another typically Dutch food is 'Weed (New Herring)'. 'Haring happen' involves eating a raw Herring fish, sometimes covered in raw chopped onions, by picking the fish up by its tail, tilting your head backwards, opening your mouth and taking a bite. Haring happen can be traced back to 3000 B.C. although it was first eaten in Scandinavia. Every year on a Saturday in late May there is a festival called 'Vlaggetjesdag' (Flag Day). The harbor at Scheveningen is filled with ships decorated with colorful flags for Vlaggetjesdag to celebrate the first catch of Herring (usually called 'Hollandse Nieuwe' (the Dutch new). The first barrel of 'Hollandse Nieuwe' is usually auctioned with the profit donated to charity.

Finding the ingredients for an Dutch Recipe is not so easy when you do not know the names of the ingredients. Take time to make a list of ingredients and the name they may be found under at the Local Markets. You may have to look and ask questions the first few times if you are unfamiliar with ingredient names.

Most Dutch dishes don’t require you to purchase any special tools. However, having a coffee grinder helps with roasting and grinding spices and maximizes their volatile oils, which, in turn, provides your food with more flavor. A Poffertjespan is required for making authentic Dutch poffertjes.

Are you into Dutch cooking or a chef and would like to be interviewed?

Retrieved from "https://recipes.fandom.com/wiki/Dutch_Cuisine?oldid=697249"
Community content is available under CC-BY-SA unless otherwise noted.