Description Of A Feijoa Edit 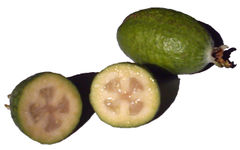 The Feijoa, also known as Pineapple Guava or Guavasteen, is an evergreen shrub or small tree, 1–7 m in height, originating from the highlands of southern Brazil, parts of Colombia, Uruguay and northern Argentina.

The fruit matures in autumn and is green, chicken-egg-sized, and ellipsoid-shaped. It has a sweet, aromatic flavour. The flesh is juicy and is divided into a clear jelly-like seed pulp and a firmer, slightly gritty opaque flesh nearer the skin. It has a slightly tart taste, and is not fully ripe until it falls to earth in autumn. The fruit drops when ripe, but can be picked from the tree prior to drop to prevent bruising. Like the closely-related guava, the fruit pulp has a gritty texture which is utilized in some natural cosmetic products as an exfoliant.

Fruit maturity is not always apparent from the outside as the fruits remain green until they are overmature or rotting. When the fruits are immature the seed pulp is white and opaque, becoming clear and jelly-like when ripe. Fruits are at their optimum maturity when the seed pulp has turned into a clear jelly with no hint of browning. Once the seed pulp and surrounding flesh start to brown, the fruit is over mature and shouldn't be eaten.

It is a warm-temperate to subtropical plant that will also grow in the tropics but requires some winter chilling to fruit. In the northern hemisphere it has been cultivated as far north as western Scotland but does not fruit every year, as winter temperatures below about -9 °C will kill the flower buds. Large quantities are grown in New Zealand, where the fruit is a popular garden tree, and where the fruit is commonly available in season. It is also possible to buy Feijoa yogurt fruit drinks etc. in New Zealand.

Feijoas are difficult to select from outside appearance, as the shell remains green unless bruised. Upon slicing, ripe feijoas range from creamy off white to slightly brown in the center, dark brown indicates overripeness. Larger Feijoas are easier to work with. If you have access to them right off the tree, they are best selected as groundfall and not picked directly off of the tree, as attached fruit tend to be underripe.

Store in the refrigerator

1. Cream the butter and sugar, blend in the feijoa.

2. Heat the milk, add the baking soda. Add to the mixture above, along with the eggs and vanilla essence.

3. Sift the flour with the baking powder, mix into the wet ingredients.

Retrieved from "https://recipes.fandom.com/wiki/Feijoa?oldid=674786"
Community content is available under CC-BY-SA unless otherwise noted.