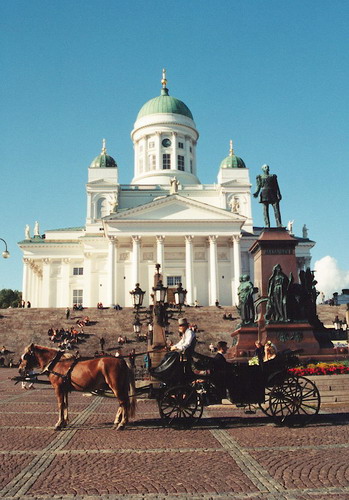 Finnish cuisine is characterized by healthiness, as natural, unprocessed foods such as whole grains and berries are used frequently. Rye, oats and barley are commonly utilized as wholegrains by the Finnish. Common types of berries used in Finnish cuisine are sea buckthorn, blueberries and cloudberries.

There are modern and traditional saides to Finnish cuisine. Modern cuisine incorporates Eastern and Western cooking concepts and techniques, such as an increased use of spices. These continental dishes have gained much popularity. Traditional Finnish dishes have a great flavours, as well as a strong visual effect, and cooking styles vary across the country.

Traditional dishes are usually based on fish, meat, vegetables and mushrooms. Although dishes are similar, usage of specific ingredients varies between Eastern and Western Finland, because of local availability. Mushrooms in cooking also became more common amongst Finnish people during World War Two.

Nowadays, Finnish cuisine features dishes that are easy to digest, as the main ingredients are vegetables. Also, these dishes are served in small quantities, evidence that other European countries, along with America, have affected the cooking style of Finland. Daily cuisine has become more global, as people have imported recipes and ingredients, and so dishes such as spaghetti Bolognese, pizza, and various types of salads are very common to the Finns. The major Finnish cities feature more fast food outlets and restaurants where Chinese, Indian and Thai food is served.

The cuisine of Finland has been criticized for its lack of diversity and flavour on many occasions, especially when compared with some of the great cuisines of the world, such as Italian and French. However, others have claimed that the full Finnish diet does not lack diversity and that the traditional dishes have a fresh and wholesome flavour.

There are two major cuisines in Finland. One of them is specific to the Western country, while the other one represents the Eastern regions. Two cooking styles emergedbecause of local availability of some ingredients and the influence of Swedish and Russian cuisines. The dishes of the Western Finns are based on fish and meat, while the Finns from the Eastern areas have developed many recipes that include vegetables and mushrooms.

Finnish cooking techniques include those commonly used throughout Europe, such as stewing, frying, boiling, seasoning, salting and baking. Traditional fish dishes are an exception, where often knowledge of a specific preparation technique is required.

Recently, Finland has performed much research into preparation methods, especially in the food chains. The aim was to enhance cooking methods, in order to obtain the best foods, with good taste and also great visual effect.

The Finnish cuisine is a modern one, and utilisies the same utensils as found across Europe, such as knives, tablespoons, teaspoons, forks, scoops, pans, trays, pots, graters, spice grinders, scales and thermometers. The complexity of the dishes results in a use of a greater number of cooking tools, but rarely requires specialty tools. The use of coffee grinders has become more common for freshly grinding spices, as it maximises the volatile oils and therefore flavour in the finished dish.

The Finns, like so many other nations, organize festivals to display and to promote their traditional dishes. It is said that in Finland, each month is related to some certain dishes. The most significant event related to Finnish food is held in Helsinki.

Other events that have importance are usually related to religious holidays. Kekri, also spelled Keyri, or Käyri, is a pagan feast day in ancient Finnish religion originally organized to celebrate the harvest and the end of the agricultural season that also coincided with the time when the cattle were taken in from pasture and settled for a winter’s stay in the barn. In the old system of reckoning time, Kekri was a critical period between the old and new years when the ancestor spirits came to visit their former homes. The living accordingly held feasts honouring the dead. Food and drink were an integral part of this festival, and were offered to the dead. Kekri originally fell on Michaelmas, September 29, but was later shifted to November 1, All Saint's Day, soon after Christianity became the national religion, in the 12th century.

Retrieved from "https://recipes.fandom.com/wiki/Finnish_Cuisine?oldid=739896"
Community content is available under CC-BY-SA unless otherwise noted.