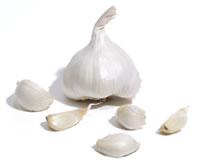 Garlic (Allium sativum) is a perennial plant in the family Alliaceae and genus Allium, closely related to the onion, shallot, and leek. It does not grow in the wild, and is thought to have arisen in cultivation, probably descended from the species Allium longicuspis, which grows wild in south-western Asia. Garlic has been used throughout all of recorded history for both culinary and medicinal purposes.

For years garlic has been the topic of much folklore. In ancient times, its pungent odor was believed to supply strength and courage to those who ate it. Garlic has been used for numerous things including embalming, warding off evil spirits, and curing everything from the common cold to tuberculosis and broken bones.

Even in modern times, garlic is still being promoted as a health food with medicinal properties. Though garlic is a nutritious food, many of the claims surrounding it are not backed up by research.

Garlic is a member of the Allium genus and classified as Allium sativa. The garlic bulb is covered with a loose, white, crackly outer skin and comprised of individual sections called cloves. Each clove is covered in a white sheath. 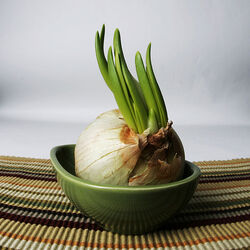 The portion of the plant most often consumed is an underground storage structure called a head. A head of garlic is composed of a dozen or more discrete cloves, each of which is a botanical bulb, an underground structure comprised of thickened leaf bases. Each garlic clove is made up of just one leaf base, unlike onions, which are composed of numerous leaf layers. The above-ground portions of the garlic plant are also sometimes consumed, particularly while immature and tender.

Garlic is very popular in the Middle East and Mediterranean countries, India and China. In America, 250 million pounds of garlic are consumed per year and its use is growing.

Garlic is characterized by its strong flavor and smell, stemming from its sulfur compounds. It makes a great flavoring agent for a variety of dishes. Garlic has a powerful pungent or "hot" flavour when raw, which mellows considerably when it is cooked. Raw or cooked, garlic is noted for its strong characteristic odor, and for giving those who eat it a distinctive breath odor as well. Some cultures accept the odor of garlic more than others. Northern European cuisines, for example, use garlic only modestly and tend to cook it for long periods of time to diminish its strength.

There are approximately 300 varieties of garlic grown throughout the world. In the United States about 90% of the garlic is grown in California and most comes in two types, early and late.

Early garlic is white or off-white in color and harvested in mid-summer. Late garlic is off-white on the outside.

Other forms of Garlic[]

Garlic is available year-round frozen or fresh. When buying fresh garlic, choose from plump, dry heads that feel firm. Avoid soft, mushy or shriveled cloves. American garlic should be white to off-white. Garlic should be stored in a cool, dark place (though not a refrigerator) and can be kept for several weeks. Many people use small clay garlic holders to keep their garlic as fresh as possible. Cloves that have sprouted can still be used but they will not be as strong in flavor as fresher cloves. The sprouts themselves can be cut up like scallions and chives and used in dishes.

To remove individual garlic cloves, peel outer layers from the bulb and snap out each clove from the base. Cloves can then be peeled very easily. For a more mild flavor, whole cloves can be added (unpeeled for an even more subtle taste) to food while it cooks or marinates and then discarded before serving the meal. Another trick for imparting a mild garlic flavor in your dish is to spear a garlic clove with a fork and stir your dish with it then discard the garlic when stirring is complete.

For a stronger flavor, used chopped, crushed, pressed or pureed garlic in dishes. The more finely garlic is chopped, the stronger its flavor will be. To chop garlic, cut in half lengthwise (remove the green core if there is one — it is bitter). Make several lengthwise cuts and then cut crosswise. A garlic press can be used also though these can be a bit tricky to clean.

To remove garlic odor from hands, use salt or lemon juice and then wash your hands with soap.

Cooking garlic decreases the strength of its flavor making it much milder. The longer it is cooked, the more mild it tastes. Be careful not to sautè garlic too long at too high a temperature, it will brown very quickly and can become bitter.

To bake garlic, place whole, unpeeled bulbs rounded side down in a shallow baking dish, drizzle with oil, cover with foil and bake for 1½ hours at 325 °F.