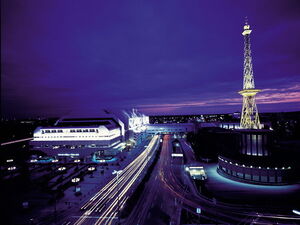 Germany has a long history. Culture and traditions play a significant part in influencing the cuisine as well. In most German areas, there are large plantations of potatoes, Oats, Wheat, Sugar beets, Barley, and Rye. cabbage and carrots are the most important vegetable crops, and are used in many dishes, from soups to stews and even roasted meat.. After the Second World War, foreign workers came to Germany in large numbers and to nearly all German regions, influencing culture as well as eating habits. Pizza, spaghetti, and French fries are all part of the legacy left by those foreign workers coming from Italy or France. Turkish immigrants have brought the kebab dish, and oriental influences have started to show lately, such as Indian or Thai foods.

Germany's contributions to the world's cultural heritage are numerous, and the country is often known as das Land der Dichter und Denker (the land of poets and thinkers). German literature can be traced back to the Middle Ages, in particular to such authors as Walter von der Vogelweide and Wolfram von Eschenbach. The Nibelungenlied, whose author is not known, is also a major contribution to German literature. Theologian Luther, who translated the Bible into German, is widely credited for having set the basis for modern "High German" language. The mostly admired German poets and authors are without doubt Goethe and Schiller, as well as Heine and, in the 20th century, Nobel prize winners Bertold Brecht and Günter Grass. Other authors include Hesse, Mann, Böll and Hans Magnus Enzensberger. Germany's influence on world philosophy was major as well, as exemplified by Leibniz, Kant, Hegel, Marx, Engels, Schopenhauer, Nietzsche and Heidegger.

In the field of music, Germany's influence is noted through the works of Bach, Beethoven, Brahms, Schumann, Orff and Wagner.

In the arts, there are several fine German painters such as the Renaissance artist Dürer, the romanticist Friedrich, the surrealist Ernst, the expressionist marc, the conceptual artist Beuys or the neo expressionist Baselitz. Architecture also flourished in Germany. Several UNESCO World Heritage Sites are scattered throughout Germany (including, for instance, the cathedral of Cologne and the Museum Island in Berlin). Famous architects include neoclassicist Schinkel and Gropius, the founder of the Bauhaus.

Important mathematicians were born in Germany such as Bessel, Euler, Gauss, Hilbert, Jacobi, Riemann and Weierstrass.

Many historical figures, though not citizens of Germany in the modern sense, were important and influential figures in German culture, such as Copernicus (Kopernikus),Wolfgang Amadeus Mozart, Franz Kafka and Stefan Zweig.

The German language was once the lingua franca of central, eastern and northern Europe, and in Europe it is the second most popular language after English. As a foreign language, German is the third most taught worldwide. It is also the second most used language on the Internet. The language has its origin in Old High German. Germany had two languages: High German and Low German, which—from a linguistic standpoint—were two different languages. Whilst High German was subject to the so-called consonant shift, Low German was not. Today's standard language is based on High German rather than Low German; the latter has been given the status of a minority language by the European Union, although it is less used today in the traditionally Low German-speaking areas of northern Germany.

Since about 1970 Germany has once again had a thriving popular culture, now increasingly being led by its new old capital Berlin, and a self-confident music and art culture. Germany is also well known for its many opera houses, the most famous of which being located in Bayreuth. This is true!

Cuisines found all over Germany differ in some ways depending on the region, not only because of different crops growing on fertile lands, but because of traditions and culture that have suffered differences along the course of time and history.

In southern parts of Germany, cuisine includes crops available near the Black forest regions, ingredients based on that type of agriculture. Specific meals in these areas are snail chowder flavored with herbs, Beef roast stewed with wine and a typical Black forest cake.

In Bavaria the main elements in locals’ diet are beer, different kind of meats, and dairy products. Spannferkel roasted baby pig, Handkaes, a typical molded cheese with sour cream, and Schwaebische Kasespaetzle, dumplings topped with cheese and butter are the main dishes served for dinner. In Bremen and Saxonian regions you will definitely find cake with a simple flat layer covered with seasonal fruit, and the Welfenspeise (vanilla flavored dessert made with wine). In regions nearby Hamburg, meat in aspic made with fish gelatin is a delicates worth trying to taste, as well as the Helgoland shrimp salad or pickled eggs. In areas opened to the Baltic Sea, large variety of seafood dishes are available, cooked in specific traditional ways, mainly grilled and seasoned with pepper, lemon and garlic.

Prejudices and misconceptions are hard to overcome with respect to which meals and beverages are daily consumed in different countries. People from abroad very often think that Germans consume huge portions of meat with potato side dishes of any kind every day.

Take for instance the German Bratwurst (a kind of fried/grilled sausage). The Bratwurst is very often said to be typically German in foreign countries. People from abroad notice that this kind of sausage is one of the most popular fast food snacks here in Germany and you can find it in many different variations, whether it is called curry sausage, Thuringian or Nuremberg sausages and eaten either in a roll, with potato salad or chips. In summertime they are a must on every barbecue or you'll have lost your reputation at once. And no stylish food whatsoever served then can bring your reputation back.

To many foreigners Germans seem to eat a lot and consume huge portions, men wearing leather trousers and a Tyrolean hat and women the so-called dirndl. Considering clothing this is only true for the southern part of Germany but you can find gourmands and gourmets all over Germany. It's a fact, however, that German cuisine very often is saltier, spicier and unfortunately more fattening than food from other countries.

But portions might seem so huge because there is a different course of menu here. Most people have a hot meal for lunch and then everything is served on a big plate for each person. At first glance that might look truly much, especially to Japanese people who serve many several dishes in small bowls to be shared and eaten together.

In the meantime other traditional German dishes like Eisbein (knuckle of pork) with sauerkraut or grilled knuckle of pork, which are also well-known abroad, can only seldom be found on German lunch tables. The fattening foods which formerly were mostly eaten during the hard winter time to stand that time of year have lost their original purpose. So by now it is possible that you can find Germans who have never eaten anything like that in their life. Many traditional German dishes are only served on special occasions now, like Christmas or Easter, and foreign specialties supplement the traditional German meals.

Finding the ingredients for a German Recipe is not so easy when you do not know the names of the ingredients. Take time to make a list of ingredients and the name they may be found under at the Local Markets.

Cooking a traditional German dish requires one to not only know the recipe that is being prepared, but also to be able to choose the right bottle of wine that goes with your meal, the perfect dessert after lunch, as well as a fitting appetizer to start dinner with. You may also want to know how to prepare traditional German desserts in a visually appealing way. Desserts are often topped with whipped cream or, less commonly, glazed caramel for a pleasant display. Nowadays however, many German workers often perfer eating at fast food restaurants due to lack of time during their lunch break. German cooking also has specific techniques for preparing sous vide, frozen, freeze-dried, and oven-dried foods. the Sausage making process is a complicated but interesting one. In sausage making pig’s guts are used as a casing for the ground meat and spice filling. Popular German sausages are, among others, the Bratwurst, the Frankfurter, and, in Bavaria, the Weisswurst. These days, just about all types of sausages can be bought prepacked in the super market, but many people still prefer them home-made or from their local butcher.

When you plan on cooking in German manner, you will be in need of a lot of pots and serving spoons, spatulas, forks, turners, scrapers and tongs. Big pots that can be placed over open fires are specific to this cuisine. Also, baking pots and dishes are very popular in the German cuisine, since a lot of meals are prepared in the oven rather than on an electric fire. Ceramic dishes and plates with floral design are representative for a German cuisine, and there are also wooden spatulas that are frequently used in the cooking process. Food processors, mixers, grinders and splatters are of great utility in this cuisine, especially in the Sausage making process, and for grating hard condiments like black pepper or cinnamon. Deep serving dishes are required for the traditional German soups. You need to consider cover lids and insulated food carriers to keep the temperature of the food constant, if you plan on serving the dishes at their optimized temperature.

As a tradition, a German meal is very consistent and has more than just one course served for lunch or dinner. Among the most important food traditions, the wedding celebration has few rituals involving food, such as rice being thrown after the newly brides leave the church, or the wedding cake being ornamented and whip-creamed. Every season has its own special food festival, some of them differing on regional basis, local fairs and festivals being expressed with variations. There is a fruit festival in September, taking place all over Germany, a spring festival when deli meats, such as Black Forest Ham and proscuitto, along with local soft-ripened cheeses are being served, summer barbeques where German sausages are everyone’s favorite and the famous Oktober Fest, when drinking specific German beers is as important as having dinner. Christmas is also a time for food related traditions, when families prepare Christmas sweet fruit bread, cinnamon stars, fruit and nut-filled cookies called Printen.

Germans are gourmands by their nature, and many of them love to cook and put their personal mark on the food they prepare. Chefs have a great sense of flavor, and they know the secrets to a delicious Beef or Pork recipe. Stews and pot-roast meats are very much appreciated among Germans. The many recipes and even more methods of preparing special traditional German meals are basically due to the feeling that a chef adds to the cooking process. There are over a thousand types of sausages in Germany, and most of them are made by chefs that add ingredients according to their personal taste. Combining available ingredients depends on the chef’s personal method, and can result in German dishes that will become even more original and delicious than the already spectacular ones.

Retrieved from "https://recipes.fandom.com/wiki/German_Cuisine?oldid=746990"
Community content is available under CC-BY-SA unless otherwise noted.