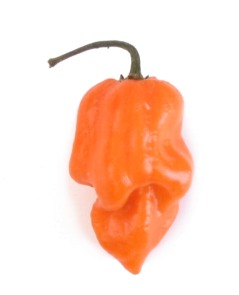 This distinctively flavored, extremely hot chile is small and lantern-shaped. The habanero ranges from light green to bright orange when ripe. It's generally used for sauces in both its fresh and dried form. The peppers are actually so hot and dangerous that precautionary measures should be taken when handling them, including nylon or latex gloves and goggles to prevent getting capsaicin in your eyes. Capsaicin is the chemical used in Pepper Spray. When cooking with these, be conservative in the amounts used.

Habanero is not a common chili at supermarkets, but does pop up from time to time. Generally found at super markets are Scotch Bonnet variety (orange), which are not quite as hot as other varieties. The Red Seville is a much harder to find pepper and generally need to be special ordered online or sometimes at a fresh food type store.

When buying, pick out firm peppers without any bruises or darkened areas.

Retrieved from "https://recipes.fandom.com/wiki/Habanero_chile?oldid=645681"
Community content is available under CC-BY-SA unless otherwise noted.