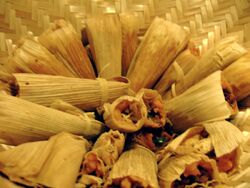 Honduras is a beautiful country, the cuisine is mostly based on unprocessed products and is very healthy. People make use extensively of many types of fruits and vegetables.

The cuisine of Honduras was influenced by the regional diversity of fruits, vegetables, and other foods readily available.

The fruits that are used most often are: pineapples, mangoes, bananas, guavas, plantains, breadfruits and coconuts. The pineapples are utilized entirely. People prepare tea or vinegar from its skin. Also, many of the desserts that are prepared in Honduras contain pineapple flesh. These range from pies to juices and jam. The superior side of the fruit is placed into a container with water. After the roots emerge, it is replanted. On the other side, other ingredients that can be found frequently in a Honduran dish are: pumpkin, cassava root, corn, beans, rice.

There are more than 20 varieties of tamales in Honduras. All these are made from cornmeal and beans, meat, chilies and various vegetables. The ingredients differ from one recipe of tamales to another, and this is how the diversity is explained. The tamales are usually served during the Christmas. Regarding the meats, Pork, Chicken and seafood are the ones that are used most frequently. Of course, the dishes that are based on seafood are prepared more frequently in the coastal region of the country. One of the recipes that feature Pork involves filling a whole pig with corn dough. Besides the ingredients, another factor that makes this recipe special is the preparation method. The pig is fried in certain ovens, which are made from sun-dried bricks.

A dish that is very famous in Honduras is tortillas. These are served as they are or loaded with cheese, meat or beans. In this case, they are named baleadas.

Honduras features different cooking styles from one region to another. This fact is the result of the influences each region has gathered. Also, the ingredients determine this diversity. The western and the central regions of the country have a cuisine based on corn, while people from the Eastern Honduras put a greater accent on the rice and the cassava root. Also, the Eastern part of the country, which comprises the coastal region, too, uses the seafood more frequently.

Each ingredient requires being prepared in a certain way. For example, fish is broiled with lemon juice and garlic. In most cases, the Chicken and Pork are fried. The dishes that are based on beans may also include coconut milk or garlic. The rice is prepared with vegetables and spices. For instance, some of the rice dishes may contain carrots or peas.

Hondurans, however, make use of the same preparation techniques that are used by most of the world. Therefore, the cooking methods include, but do not resume to: frying, roasting, boiling, salting, seasoning, baking, drying and grinding. As mentioned before, each recipe implies the use of one or more of these cooking techniques.

Although Honduras does not have a very modern cuisine, people use the basic cooking utensils that are used in many other countries. Some dishes may be prepared in adobe ovens, instead of being cooked in modern ovens. The lack of very complex cooking equipment is another proof of the poverty of this country. Besides the classical forks, knives, teaspoons, tablespoons, scoops, pans, trays, pots, graters and portioners, a typical Honduran cuisine may also feature utensil trays that are made of mahogany. Most Honduran dishes don’t require you to purchase any special tools. However, having a coffee grinder helps with roasting and grinding spices and maximizes their volatile oils, which, in turn, provides your food with more flavor. 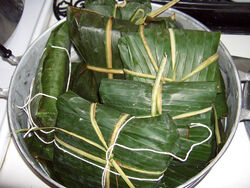 Most of the Honduran events are related to their religion. The majority of the population is Catholic and the days of the saints present a great importance for people of Honduras. All the communities from the cities and villages organize feast to celebrate the patron saints. One of the towns, La Ceiba, features the most important Carnival of Honduras. Although these events may not focus on food, there are certain dishes that are prepared on these occasions.

Also, the Christmas is a very important holiday for the Hondurans. Tamales are usually prepared at that time and most frequently, a variety that is named nacatamales. These are made from banana leaves filled with meat and rice. Chilate is another traditional dish that is prepared during Christmas or the Holy Week. As a common dessert, Torrejas are served warm at the end of the Christmas meal. Torrejas are very similar to a french toast simmered in sugar cane juice and spices: cinnamon, cloves and all spice.

Other famous festival in Honduras is Typical Gastronomical Festival, which is held in June in El Paraiso. On this occasion, the culture of the city is promoted. People can enjoy the traditional music, dances, but most important, the traditional food of Honduras, which is the main goal of this event.

Retrieved from "https://recipes.fandom.com/wiki/Honduran_Cuisine?oldid=746660"
Community content is available under CC-BY-SA unless otherwise noted.