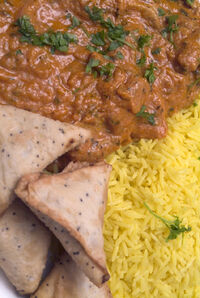 The amazing blend of vegetarian and omni-food elements in Indian cuisine make it one of the most appreciated cooking styles all over the world. Starting with the Vedic period, when fruit and vegetables together with fish, meat and dairy products were often part of the regular diet, Indian cuisine has been under constant change. With influences of Buddhism and Jainism, Indian cuisine was flexible enough to change together with the society without losing its roots. The principle of passivity influenced priests who turned to a vegetarian diet and this spread through the population.

Arab and Chinese traders also had a contribution to Indian cuisine as we know it today. Among other groups that influenced it we can name the Persians, Mongolians, Turks, the British and the Portuguese. Ayurveda speaks of food that is either satvic, rajasic or tamasic, depending on the effect that particular diet has on the body and the mind. Spices were cultivated in India since 3000 BC and rice plantations began appearing in the Ganges delta.

The Mughali cuisine is specific to India and it originated from the combination of Islamic principles with the gravies characteristic to India. New dishes appeared in Indian cuisine - pilafs, kebabs and others characteristic to different migratory populations. Mughals became known as expert cooks and their dishes were appreciated both in India and in the neighboring countries. Potatoes were introduced in India by the Portuguese in the 17th century and other European influences played their part as well. As you can see in almost any part of India today, the East and the West met in the middle of India and so there is not one style of cooking or one type of religion. India is, in its heart, the true melting pot of society, culture, and cooking.

Modern Indian cuisine has taken a global aspect, and is appreciated both at home in New Delhi and in cities like New York or Paris. The last few decades have seen a huge increase in Indian cuisine popularity and the Indian fast food industry along with Bollywood is also growing.

Indian diets are diverse in each region, state and even community within India. Over the centuries settlers brought with them the culinary practices of their heritage. Indian recipes have been influenced by environmental, social, religious and political factors during India's 2000 years of history. The recipes are as old as time, yet each recipe may have its own heritage and origin - each Indian chef carries the secrets passed down by family heritage for that particular recipe, the dish may vary from family to family. No two dishes are exactly the same even though the ingredients are similar. Each chef in India adds their own twist to each dish!

Finding the ingredients for an Indian Recipe is not so easy when you do not know the names of the ingredients. Take time to make a list of ingredients and the name they may be found under at the local markets. You may have to look and ask questions the first few times if you are unfamiliar with ingredient names. Most packaging will not be in English (although you might be surprised to see what does have it)!

Indian cuisine is appreciated not only for the flavors it offers, but also for the rustic, fun and sometimes almost magical preparation methods. The diversity of ingredients is huge - a fact that makes this particular cuisine one of the most diverse in the world. The main ingredients of Indian cuisine are atta flour, rice and then an amazing variety of spices and herbs. Seemingly exotic names such as e.g. dhuli moong or dhuli urad are often found in Indian cuisine recipes. Also called pulses, these ingredients require proper preparation: they can either be used whole or ground to remove the skin. Pulses are used almost exclusively in the form of dal, except chana. Vegetable oil is used for frying curries and mustard oil is also used for other frying dishes. However, it seems each Indian region prefers a different type of oil – groundnut oil in Western India, coconut oil in Southern India. Spices range from black mustard seeds, cumin, turmeric and fenugreek to ginger and coriander.

Most Indian dishes don’t require you to purchase any special tools. However, having a coffee grinder helps with roasting and grinding spices and maximizes their volatile oils, which, in turn, provides your food with more flavor. It is worth noting that for the purist, however, only a Mortar and Pestle (preferably heavy stone based such as Granite) would do for making the basic pastes due to the difference in texture and flavor it provides vs. blending or grinding in a metal bladed food processor. Another option would be to purchase a Wet grinder, which is available in most Indian specialty shops, something that is quintessential if one were to make Dosas (South Indian Rice Crepes) or Idlis ( Steamed Rice cakes). If you do use an electric grinder, make sure you always clean it out before you change spices. Any mix between spices will change the way your food tastes. With some spices, a little goes a long way, so even a small amount of 'contamination' can change things.

However, here are a few kitchen utensils you might want to use:

Finding the ingredients for an Indian Recipe is not so easy when you do not know the names of the ingredients. Take time to make a list of ingredients and the name they may be found under at the Local Markets. You may have to look and ask questions the first few times if you are unfamiliar with ingredient names. Most packaging will not be in English!

The Wazwan is Kashmir's most formal meal! It is a ritual serving of all the food in the house to the guest. This wazwan must in turn be fully appreciated by the guest, for the wazwan is a ceremony, not a simple meal. Days of planning and hours of actual cooking go into the making and serving of a wazwan. The wazwan is normally restricted to special occasions of celebration in homes as tradition includes table settings for groups of four on the floor where choice dishes are served, including aromatic herbs and fresh vegetables of the community.

First the Tash-t-Nari is passed around, and diners wash their hands from warm water in a samovar. The waza (chief cook) supervises each dish. Ingredients for the meal have been hand-picked and exacting effort has ensured that each dish is a one-of-a-kind. Choice delicacies such as Methi and Tabakmaaz, Roganjosh and Rista, and a variety of kebabs and vegetable preparations are served. 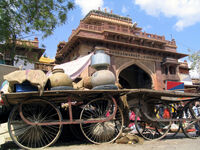 India has a rich and unique cultural heritage as well as an actively preserved established traditions throughout history. It has also absorbed customs from both invaders and immigrants. Many cultural practices and monuments, such as the Taj Mahal and other Islamic architecture, have been inherited from the rule of Mughal emperors.

Religion in India is very important, with many practices imbued with pomp and vitality accompanying their underlying spiritual qualities. A melting pot of many religions, India has rich festivals celebrated by one and all. The most widely known and popular celebrations include the Hindu festivals of Diwali, Holi and Dussera. more...

Retrieved from "https://recipes.fandom.com/wiki/Indian_Cuisine?oldid=719749"
Community content is available under CC-BY-SA unless otherwise noted.