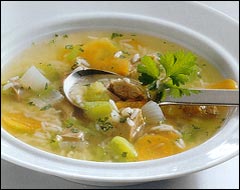 This is an Icelandic soup (Kjötsúpa). Traditionally, fatty lamb meat is used but many now prefer to remove most of the fat. Other versions of the soup may add or substitute other vegetables, like cabbage, kale or turnips, and a fistful of oats or oatmeal was sometimes added to thicken it somewhat, but this is the version I like best; simple, clear and thin, albeit tasty! I also like the pure version, but tried the one with oatmeal too. It's excellent - very "stick to your ribs". It's also good the next day - and easy to pick the solid fat off after refrigeration. Serve hot to 6 to 8 people as a substantial meal.

Retrieved from "https://recipes.fandom.com/wiki/Kjotsupa?oldid=738688"
Community content is available under CC-BY-SA unless otherwise noted.