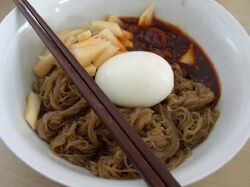 Naengmyeon, literally "cold noodles," is a Korean dish that is extremely popular during the summer. It consists of several varieties of thin, hand-made noodles (typically made from arrowroot (칡냉면/chilk naengmyeon) or buckwheat (메밀냉면/memil naengmyeon flour), and is served in a large bowl with a tangy iced broth, raw julienned vegetables, a slice of a Korean pear, and often a boiled egg and/or cold beef.

Two main varieties of naengmyeon exist: mul naengmyeon (물냉면), and bibim naengmyeon (비빔냉면). The former variety is served as a cold soup with the noodles contained in broth (usually beef). The latter variety is served as more of a salad in a spicy dressing made primarily from gochujang (red chile paste). In the case of bibim naengmyeon, a bowl of the broth used in mul naengmyeon is often served on the side. Although these are the two major variations of the dish, several others do exist, typically varying either the composition of the broth of mul naengmyeon, the meat or vegetables added to the noodles, or both.

Retrieved from "https://recipes.fandom.com/wiki/Korean_buckwheat_noodles?oldid=618942"
Community content is available under CC-BY-SA unless otherwise noted.