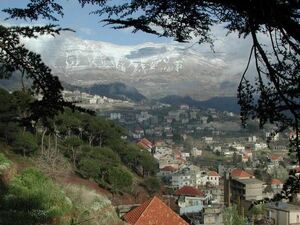 Beirut, which is the capital of Lebanon, has been destroyed in several times by earthquakes, fires or civil wars. This did not stop the reconstruction of the buildings, nor did it affect the Lebanese culture in a drastic way. Nowadays, Lebanon is among the greatest constructions sites around the globe. Each time, the city is built in such manner so it regains the original atmosphere. Neither was the national cuisine affected by these disasters. As the Lebanese cuisine has very old and strong roots, surviving the catastrophes was an easy thing.

Most of the traditional cuisines of the Southern and Eastern countries of the Mediterranean area are alike. The dishes share the same name, although the ingredients and the preparation techniques may vary slightly from one country to another. However, the cuisine of Lebanon is seen as a mixture of European and Middle Eastern cooking concepts. The Lebanese cuisine is representative for the Mediterranean space and is appreciated by the other nations for being one of the healthiest.

The cuisine of Lebanon is based on fruits, vegetables, starches, seafood and fish, while the meat is consumed in moderation. People prefer to use poultry, rather than red meat. The type of red meat that predominates is Lamb. garlic and olive oil are widely used and they represent quintessential ingredients to most of the Lebanese foods. cream and butter are usually contained by desserts. The sauces do not have an important role and furthermore, people tend to put a stronger accent on spices, herbs and fresh ingredients, in order to create unique dishes.

Lebanon features a diverse cuisine, which has incorporated many cooking concepts from other countries, in time. This is due to the fact that the country represented for a long period of time a crossroad for many civilizations. Although this cuisine dates from ancient times, only recently it has become famous, all around the world. This tiny country came to influence many other nations, after it has gained certain popularity. As evidence, the Middle Eastern cuisine features many cooking concepts that originate in Lebanon.

Kibbeh is probably the best known Lebanese food. It is a paste made from Lamb meat and bulgur wheat. At first, its preparation involved hammering Lamb meat using mortar and a pestle. After this, spices and bulgur were added. As this technique could have been considered scary for the foreigners, the electric grinder and the food processors eased the preparation. This food knows many variations, among which kibbeh nayee is the best known. Kibbeh bil-saneeya and kibbeh rass are other two varieties, which contain cooked meat and pine nuts. yoghurt sauce is added to these dishes, when they are served.

Bread is quintessential in the Lebanese cuisine. Most of the dishes are served with it. olive oil and zahtar are used to enhance the flavor of the bread that is served at breakfast. This food is used along with the dishes or as a significant ingredient of the snacks.

The cuisine of Lebanon has integrated many cooking concepts through the centuries, from the countries in the Mediterranean area. However, people chose to make use of the local ingredients and to use certain cooking techniques in order to create some exceptional dishes and to give the Lebanese cuisine a unique identity. Although the influences were many, the territory of the country is small and all the cooking concepts that were adopted began to be practiced by the entire population of Lebanon. Hence, there are not any regional cuisines inside the country, or different cooking styles between people from one part of the country and the others.

When preparing kibbeh in ancient times, people used to smash with a pestle the Lamb meat inside a bowl or a mortar. Although this technique is considered scary by the ones that are strangers to the Lebanese cuisine, the resulting dish is a delicacy. Fortunately, since the cooking equipment has been developed, this method is not used anymore. The other methods that are popular in Lebanon are not typical only to this country, whatsoever. They are used in many other countries from Europe and Middle East. Each dish, nevertheless, requires being prepared in a certain way. Furthermore, each ingredient that is added to a dish may undergo one of the following cooking methods: frying, boiling, stewing, roasting, salting, drying and smoking. People from Lebanon use high quantities of herbs and spices, in order to enhance the flavor of the dishes. Therefore, seasoning is another cooking method that is widely used in the Lebanese cuisine.

The cooking equipment that is used in Lebanon was developed, in time. At first, people used a mortar named jorn and moddaqa – a tool that is similar to a pestle, to prepare the traditional dish of Lebanon, which is kibbeh. Later, when grinders and food processors began to be used in the Lebanese kitchen, these utensils became useless. However, they are still used in the rural areas of the country, by the poor people.

Besides these, the cooking tools that can be found in a typical Lebanese cuisine are similar to those that are used in Europe and in Northern America. The equipment that is utilized for preparing, storing and serving foods includes, but does not resume to: kitchen knives, forks, teaspoons, tablespoons, food scoops, turners, graters, grinders for spices, as well as boxes for storing them, plates, pans, trays, pots, bowls and devices for measuring the temperature and the weight. Food scales are used for adding ingredients to a recipe in certain quantities, while kitchen thermometers help when preparing the dishes at a certain temperature is desired. This way, overcooking is avoided.

Most Lebanese dishes don’t require you to purchase any special tools. However, having a coffee grinder helps with roasting and grinding spices and maximises their volatile oils, which, in turn, provides your food with more flavour.

People from Lebanon are proud of their traditional dishes and this fact explains the fame of the Lebanese cuisine. Dishes that once were unknown outside the country are now consumed in restaurants from all over the world. The traditional foods are honored at festivals or any other similar events. There are many such events in Byblos, Baalbeck and Beirut. Although many of the festivals may not focus on the traditional foods, each of these events represents a great opportunity for the tourists to try the Lebanese foods and for the local people to display their delicacies.

Festivals that have as main goal promoting the traditional Lebanese foods are not organized only in Lebanon. There are events that are planned outside the borders of the country by the communities of Lebanese people that live in the other countries. For example, in Texas, a Lebanese Food Festival is organized each year. These festivals are good occasions for people from Lebanon to display their national dishes and drinks. Also, there are many competitions organized at these festivals.

Retrieved from "https://recipes.fandom.com/wiki/Lebanese_Cuisine?oldid=748346"
Community content is available under CC-BY-SA unless otherwise noted.