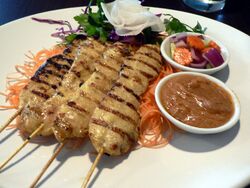 Little is known about the early history of Malaysian cuisine, yet the archaeological tools that have been discovered implement that there were occupants in the north, who migrated via China and Tibet. The early settlers were nomadic hunter-gathers who probably hunted smaller creatures which they cooked with the aid of crude instruments made from stone and mainly occupied the forests and the jungles. Not very surprisingly, their diets consisted mainly of and the crops which they grew as well as the abundant indigenous fruit and vegetables. Then by the 1st century BC, trading links were established between China and India, which have resulted in having a major impact on the cuisine of Malaysia. Perhaps the other major influences on the Malaysian Cuisine were introduced by virtue of rulers or protectors coming from different regions over the preceding centuries including Cambodians, Sumatrans, Javanese, Chinese, Portuguese, Dutch and Japanese finally culminating with the British who had colonized the areas in the East. All this encouraged immigration of large numbers of Indians and Chinese.

Now for decades Malaysia has been a multicultural society, with Malays, Chinese and Indians co-habitating. Therefore it is not all that easy for you to find authentic Malay cuisine in Malaysian restaurants or even in the Malay cuisine recipe books. Nevertheless you can always take your pick of Chinese and Malay food, or go for a fusion of the two known as "Nyonya", a local variation on Chinese and Malay ingredients with the local spices). Since Malaysia is a multicultural society, the Malay Cuisine is quite multi-ethic too. Satays (meat Kebabs in spicy Peanut sauce) are a Malaysian Cuisine creation and satay recipes can be found almost everywhere. The Chinese and Indian influence on Malaysia has marred its true authentic cuisine. The Malay dishes in the Malaysian cuisine are extremely spicy and very tasty too. Fried Soybean curried meat in coconut, fiery curry prawns and spiced curried meat in coconut in marinade are a few of the very authentic Malaysian cuisines that you can find. Muslim Indian dishes have also developed a distinct style in the Malaysian style of cooking.

It was only in 1963 when Malaysia was established as a united country. The rich racial mix has thus created a unified cuisine in Malaysia, but it still at times retains the unique qualities of traditional cooking methods and ingredients used in the Malay cuisine that has been adopted by the Indian, Indonesian and Chinese cultures. In general, the cuisines of Malaysia that you might find will be very spicy, and you can differentiate the Malay cuisine from the Chinese cuisine as the Chinese cuisine will be milder in taste, whereas the Malay cuisine will be spicy and very hot. For centuries, rice and noodles have been staples of the Malaysian diet and the Malays immensely use an abundant supply of fresh locally grown fruit and vegetables in their cuisine. Seasoning such as galangal, chilli, lemon grass, lime leaves, coriander, turmeric, cumin, fenug reek, cardamom, clove, cinnamon and star aniseed are common ingredients used in the Malaysian cuisine. Fish and seafood are extremely popular ingredients as is Beef, mutton and Chicken. You might not find many Pork dishes in the Malaysian cuisine as nearly 50% of the Malaysian population is constituted by Muslims, who do not eat Pork meat as it is considered illegal in their religion (Islam). Peanuts and coconut milk are also widely used in many of the dishes in the Malaysian cuisine. Traditionally, the everyday cuisine of the Malays consists of rice, a meat or seafood dish and a vegetable dish.

There is no special equipment needed for the Malaysian Cuisine. Nevertheless, as rice and noodles make up the everyday diet of the Malays, and if you want to enjoy your scrumptious Malaysian dish in the traditional Malay way, then it would not be a bad idea to get some chopsticks. Other utensils are commonly found in most of the kitchens worldwide, such as stoves, ovens, deep frying pans etc. Non-stick pots and pans are needed for some of the recipes. Moreover, instead of using a stainless steel stirrer or spoon for cooking, wooden ones are preferred. To thread seasoned meat it is best to use Satay sticks or fine metal skewers. Grills are also needed to grill some special meat dishes and vegetarian dishes found in the Malaysian Cuisine. It is not too hard to find some of the equipment that requires preparing a fine Malaysian Cuisine; surprisingly they are now readily available in many food departmental stores. You will certainly enjoy cooking your Malaysian Cuisine with some of these fine equipments.

As Malaysia is a multicultural society, there are many traditions and festivals that are celebrated with grand festivity. Nearly 50% of the Malay population is constituted by the Muslims; therefore the major Islamic events are connected with Ramadan. Scrumptious desserts and dishes are prepared in this month. One of the most prominent Malaysian festival where abundant varieties of the Malay cuisines is known as the Hari Raya Puasa, which marks the end of Ramadan and there are three days of celebrations. Hari Raya Haji another traditional festival marks the completion of the Hajj (pilgrimage to Mecca) with two-day feast of cakes and sweets. The Chinese New Year, which is celebrated in January or February in Malaysia, is welcomed in with dances, parades, grand Malaysian cuisine’s being served all over and much good cheer. There is a tradition in Malaysia of serving exotic Malaysian dishes in all of its festivals; even the traditional festivals are greeted with lip-licking spicy Malaysian food.

Retrieved from "https://recipes.fandom.com/wiki/Malaysian_Cuisine?oldid=757241"
Community content is available under CC-BY-SA unless otherwise noted.