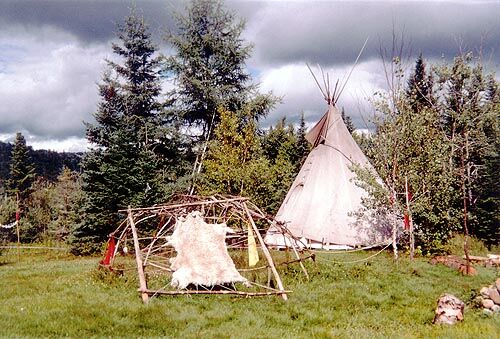 Native American cuisine of the United States developed over the time by combining old traditional influences with influences borrowed from other people. Allover the territory of the United States there are today spread numerous communities of Native Americans, and each of these communities have different ways of cooking traditional dishes and use different types of ingredients. Native Americans situated on the Eastern Woodlands used to crop plants like beans, corn and squash. Beside these some other types of domesticated crops like Magyars, quinoa, sumpweed, a variety of amaranth, and sunflower were planted on these lands. Some of the most popular dishes among people from these territories are corn bread, fried bread, pemmicam, succotash, bird brain stew, buffalo stew and acorn mush a special dish cooked usually by the Miwok people. The modern day Mexican cuisine was helped to develop by the Native American cuisine of Meso-America. People from this culture also have some special traditional dishes such as tamales, tlacoyos, pozole, mole, tortillas, mezcal and champurrado. The cuisine that developed in the South side of America , has many recipes known from the Nazca and Inca of Peru. Some of their recipes are grilled guinea pig, fried green tomatoes, ch’arki and humitas a dish very much alike Tamales.

Native American cuisine knows many different types of cooking methods some of them transmitted from generation to generation and some developed during the time under the influence of other people. Among the most popular modern Native American cooking techniques we might find barbecuing, baking, braising, grilling, deep frying, poaching, roasting, preserving, steaming, sautering, stewing and stir frying. Nowadays modern cooking methods found a way to adapt Native American cuisine to the latest influences and discoveries which concern food items or how they should be prepared. Still, food may be cooked following traditional methods and recipes using only indigenous ingredients and sometimes when possible using the original cooking techniques.

Native American communities are numerous and spread all over the United States territory. Due to this fact it should be mentioned that Native American people have many festivals and holidays. Some of them are Hopi and Zuni Soyala New Year Festival, World Peace Day, Feast of the Black Christ, Tewa Turtle Dance, El Salvador’s Day, Navajo Sing Festival, World Religions Day, Ethnic Equality Month, Iroquois Mid-Winter Ceremony, Gender Equality Month, Iroquois Maple Ceremony, National Day of Prayer, and Birthday of Cesar Chavez. During all these celebrations special dishes are cooked and served. An ubiquitous dish to any celebration is frybread. This representative dish looks like a flat dough and it is fried in oil, lard or shortening. When this dish is served with ground beef, beans or shredded cheese it is called Navajo Tacos or Indian Tacos. Frybread ca be also served with sweet ingredients such as sugar or honey and it is called fried dough.

Retrieved from "https://recipes.fandom.com/wiki/Native_American_Cuisine?oldid=509471"
Community content is available under CC-BY-SA unless otherwise noted.