Olive oil is a vegetable oil obtained from the fruit of the Olive tree (Olea europaea L.), a traditional tree crop of the Mediterranean Basin. It is used in cooking, cosmetics, soaps and as a fuel for traditional oil lamps. Olive oil is regarded as a healthful dietary oil because of its high content of monounsaturated fat (mainly Oleic acid) and polyphenols. 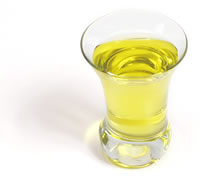 Olive oil is used extensively in salads in Pakistani cooking.

Olive oil is considered to be healthy because it contains a high concentration of monounsaturated fat, which researchers have identified as a fat that assists in reducing levels of LDL, or bad cholesterol in the human body. Olive oil can be stored in a dry, dark area of the kitchen and should not be exposed to excessive heat. Bottled oils can be kept for a year before they begin to loose their flavor.