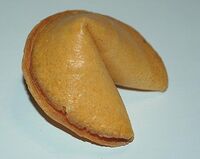 Giving credit to the Chinese, most Americans have never considered an American origin to fortune cookies, the crispy, bow-shaped sugar cookies served in restaurants as the finale of a Chinese meal.

While the Chinese have no tradition of dessert, one competing legend of the fortune cookie suggests it was introduced in the Japanese Tea Garden in San Francisco’s Golden Gate Park and the idea pirated by a local Chinese restauranteur. A Japanese American heritage is claimed by others, contending the cookie is a descendent of the sembet, a flat, round, rice cracker.

The Chinese believe the fortune cookie is a modern Chinese American interpretation of the moon cake. Legend has it that moon cakes were used in the fourteenth century as a means of critical communication. In their efforts to stave off the Mongols, Chinese soldiers disguised as monks allegedly communicated strategies by stuffing messages into moon cakes. The concept of message-stuffed pastry has supposedly endured through ages.

Perhaps the most plausible story dates back to 1918 when, in Los Angeles, David Jung, founder of the Hong Kong Noodle Co., invented the fortune cookie as a sweet treat and encouraging word for unemployed men who gathered on the streets. Some claim the cookie was more likely invented as a gimmick for Jung’s noodle business than as an icon of social concern.

Revolutionizing the process of forming fortune cookies—initially performed awkwardly with chopsticks—Edward Louie invented a folding machine for his Lotus Fortune Cookie Company, which is still in existence today in San Francisco.

Now mass produced and widely distributed, the fortune cookie is exported to China and Hong Kong with fortunes written in English. Most popular in the United States, the cookies continue to lift spirits with promises of great success, love and harmony, fame and good fortune.

Retrieved from "https://recipes.fandom.com/wiki/Origin_of_fortune_cookies?oldid=510374"
Community content is available under CC-BY-SA unless otherwise noted.