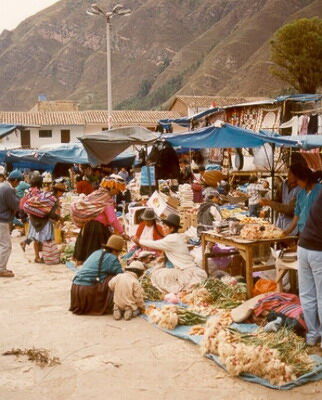 Peruvian cuisine is one of the most interesting ones on earth due to the huge variety of dishes and plant types available. The cuisine styles are also different from a geographical point of view. Noticeable differences can be seen between the cuisines of the coast, the dishes prepared in the Andes, shoes from the jungle and the general cuisine you will find in Lima. Coastal cuisine is mostly based on fish and marine life from the Pacific Ocean while the dishes in the Andes continue the traditional way of cooking, by using local ingredients and creating dishes based on corn potatoes, and tubers. Jungle cuisine has remained unchanged throughout history, being based on fruits and plants readily available in the Peruvian jungle, as well as on hunted animals. Lima offers a rich assortment of dishes and cuisines both from the local region and from the numerous immigrants that have settled in the city. I like ceviche!!

Peruvian cuisine is considered one of the most diverse in the world. Thanks to its pre-Incan and Inca heritage and to Spanish, African, French, Sino-Cantonese, Japanese and Italian immigration (mainly throughout the 19th century) it combines the flavors of four continents. With this eclectic variety of traditional dishes, the Peruvian culinary arts are in constant evolution, and impossible to list in their entirety. Suffice it to mention that along the Peruvian coast alone there are more than two thousand different types of soups, and that there are more than 250 traditional desserts.

Most of the dishes in the coastal area of Peru are based on what the Pacific Ocean supplies. The abundance of sea life found in the waters of the Peruvian coast makes this a primary source of food for a large part of the coastal population, but also serves as export goods. Considering the diversity of sea food and its abundance it comes naturally that a large majority of the specific dishes from this area are based on fish and sea fruits. One of the best examples of this characteristic is Ceviche, one of Peru’s most popular dishes, which perfectly illustrates the adaptation of the Peruvian coastal population to the availability of food. Ceviche contains several types of fish and sea fruits and is often accompanies by shrimp soup (chupe) and other dishes containing marine creatures.

Lima is a huge city that presents a very diverse population. African, European, Chinese, and Japanese immigrants that have settled in Lima – a veritable center for immigrants – have also influenced the local cuisine. Combined with traditional Peruvian dishes, the cuisine characterizing Lima is one dominated by diversity. The wave of immigrants was combined with a massive movement, started in 1950s, of peasants to cities – Lima was the number one destination. This brought the traditional Peruvian cuisine back into the city, where it produced an interesting specific cuisine after being combined with the cooking styles of the majoritary immigrant populations. Peruvians adopted the raw fish idea from the Japanese and they included rice in their traditional dishes, as the Chinese did.

Maize, tubers and potatoes are still the main items used in the cuisine from the Andes region. Although traditional dishes are still most popular here, the Peruvian population located in the Andes also consumes non-indigenous food. Meat is mostly provide by alpacas, but Peruvians also use swine and sheep meat in their dishes. The climate of the Andes did not provide the inhabitants of the area with a very rich and diverse nutrition – something that has changed over the years. There is no certain differentiation between festive and ordinary dishes. One of the most popular dishes in this region is the pachamanca, created with a diverse variety of meats such as beef and pork and slowly cooked vegetables. In fact, the traditional way to cook pachamanca is by placing the vegetables on beds of heated stones. Trout is often found in the recipes from the Andes as it is found in abundance both in nature and in fisheries.

The jungle cuisine is a distinct part of Peruvian cooking. The products used are those that are found naturally in the jungle. Exotic fruits, such as pineapple, mango and camu camu are a daily part of a jungle diet. As for meat, turtles were often the main food source for locals, but their hunting was banned when the population numbers decreased dramatically. Paiche is another appreciated meat in Peruvian jungle recipes – this large freshwater fish can be found in abundance in many jungle rivers and ponds.

By Type of Dish

Finding the ingredients for an Peruvian Recipe is not so easy when you do not know the names of the ingredients. Take time to make a list of ingredients and the name they may be found under at the Local Markets. You may have to look and ask questions the first few times if you are unfamiliar with ingredient names.

The most important aspect of Peruvian cooking involves selecting the right kinds of ingredients for your dish. Using the right amount of aji (chili pepper) for example is essential – either for spicing or for coloring the dish. The huge diversity of plant types found in Peru is also noticed in Peruvian cuisine. However, Peruvian cooking is not solely based on taste and flavors. The visual attractiveness of the dish is also important, and a balance between colors and proportion differentiates. Each traditional dish has a special cooking method, which is more or less general in all of Peru’s regions. Specialty dishes such ash anticuchos or humitas need specific ingredients to the region.

Although the preparation methods for Peruvian dishes do not require the purchase of any special equipment, it helps if you have a good set of non-stick pots and pans that allow the easy cooking for different dishes. One of the things that you should have, in case you plan to do a lot of Peruvian style cooking, is a spice box, where you should store a wide array of specific spices and use them to add flavor and enhance the visual aspect of all meals.

Inti Raimi or the Festival of the Sun was one of the Inca festivals that the Spanish conquistadors had banned. This festival included the most important feast of the Incas and is held on the Winter solstice, which is June 21 in the Southern Hemisphere. The significance of this festival was remarkable, since the people requested sun and warmth after winter, so that their crops may develop. A ceremony was performed for the sun gods and involves toasting chichas in chalices called Keros. Some Peruvians still celebrate this tradition today, although it bears more of a symbolic mark now than an actual ritual.

Peru's best known dish, ceviche, is a delicacy made from sea bass, or a combination of shrimp, Octopus and other seafood, marinated in lime juice, with hot peppers and onions. There are many chefs who creatively use the basic ingredients and cooking method for ceviche and create original and delicious food variations. They often garnish ceviche with lettuce, sweet potato and corn while the raw bass and seafood is "cooked" by the acidic variety of lime grown in Peru. Peruvian chefs are passionate about their traditional dishes and they enjoy presenting them to foreigners who have never tasted them before.