Wikipedia Article About Potato on Wikipedia

The potato (plural form: potatoes) (Solanum tuberosum) is a perennial plant of the Solanaceae, or nightshade, family, grown for its starchy tuber. In recent centuries potatoes have become the world's most important tuber crop and its fourth most important source of food energy (after rice, wheat, and maize): farmers and gardeners grow them worldwide. Growers cultivate thousands of different varieties of potato. The potato originated in the Andes, in the area of present-day countries such as Peru, Ecuador, Colombia, and Venezuela. Pre-Columbian inhabitants of the Andean cultures cultivated around 200 different kinds of potatoes.

The potato has only a very distant relationship with the sweet potato, which is more closely related to the carrot. In areas of the United States where sweet potatoes grow commonly, people sometimes refer to the "Irish potato" to distinguish the two, a reference to the source of potato's introduction into the British North American colonies.

Potatoes are a field-grown crop harvested as part of the roots of a potato plant. The Russet is the main potato variety grown in the United States, accounting for about three-quarters of planted acreage. Potato plants sprout from potato seeds, which are cut portions of whole potatoes and cost between $9 and $10 per hundred pounds. Less than 10 percent of potato production each year is not sold, but used as seed, feed, or lost on the farm where grown. In recent years, the value of potatoes used domestically, including net import value, amounted to between $8 and $9 per year for each American.

Many kinds of potatoes are seen in restaurants, grocery stores, and even homes today, but the most common of these are the russet, round white, and the red potato. Potatoes are tough and durable, store well, and have an impressive nutritional content including being a rich source of fiber, potassium and vitamin C. Like other fruits and vegetables, potatoes are a low calorie food and are free of fat, cholesterol, and sodium. Keep in mind, however, that the leaves and stems of a potato plant are poisonous and may cause illness when ingested.

Potatoes were first cultivated in the Andes Mountains over 7,000 years ago. Spanish conquistadors discovered potatoes in 1537 in what is now Peru. The Incas had cultivated them for centuries, with evidence dating back to the second century A.D. The Spaniards introduced potatoes in Europe as a new food crop. Three centuries later, potatoes’ importance in the diet of some European countries became evident when blight destroyed much of the Irish potato crop in 1845/46 and widespread famine ensued. As many as 2.5 million people perished from starvation and disease while approximately another million immigrated to the United States.

Potatoes were introduced to North America in the 18th century via Irish immigrants, however their native home is South America. Over the next two centuries, Americans increasingly incorporated potatoes into their diet as a staple food; hence the saying “meat and potatoes.” Potatoes have been a staple in the diets of Americans for over 300 years, but they have been sustaining populations worldwide for much longer. The importance of potatoes to U.S. agriculture was demonstrated in 1866 by their inclusion in the first USDA crop production statistics. Today, the United States ranks fourth worldwide in potato production behind China, Russia, and India.

Ninety percent of U.S. potatoes are planted in the spring and harvested in the fall. The marketing season for fall potatoes begins in July (for areas of early harvest) and continues through June of the following year. Unlike most produce crops, which are perishable, potatoes are well-suited for long-term storage in climate-controlled rooms or containers.

Because of their physical characteristics and storage advantages, many major fall-season potato varieties can be sold in the fresh or processing markets throughout the marketing year. Potatoes for fresh use are sold mostly on the open market (as opposed to contract production prior to the growing season), so prices are subject to market conditions. The ability of shippers to store potatoes allows them greater flexibility when marketing potatoes on the open market.

Processing potatoes, such as the Russet Burbank for French fries, are typically contracted to commercial fryers before planting time. The contracts specify the potato variety, volume, and price based on quality requirements. Since growers arrange financing and purchase potato seed prior to spring planting, contracts with processors are negotiated and signed before then.

Potatoes harvested in the winter, spring, and summer account for only 10 percent of U.S. potato production. However, these potatoes meet different or specific market needs and generally fetch higher prices than fall potatoes. For example, some consumers like “new” or “freshly dug” potatoes, such as round white, red, yellow, and purple varieties that are smaller in size and are normally not stored before sale. In addition, specialty varieties such as the round white are in demand for their chipping qualities. Moreover, winter, spring, and summer potatoes help fill any supply gaps that may arise due to shortages of the preceding fall crop in the fresh market or for processing use.

An American potato farmer grosses $2,000 on average per acre in potato sales from all four crop seasons. Sales per acre are normally highest for the winter crop and lowest for fall potatoes, but vary widely between producing States. Prices for fresh potatoes are usually higher than prices for processing potatoes due to crop-quality standards. Domestic potato prices may change not only in response to changes in weather, yield, or demand, but also to changes in supply from imported potatoes and potato products. If a surge of frozen French fries enters the country, U.S. potato processors may cut back on contracts for processing potatoes, which would be diverted to the fresh market. Fresh-market prices would likely fall as a result.

Potatoes were grown largely in New York, Pennsylvania, and Ohio before Americans migrated westward in the late 19th century. Michigan and Wisconsin became major potato producers in the early 1900s, and Maine in the 1920s. Growers in Oregon, Washington, Idaho, Colorado, and California expanded production after refrigerated rail and truck transport opened markets beyond the Western States. Later, potato-processing plants and exports also expanded the market, and the emergence of fast-food outlets across the United States increased demand for Russet Burbank potatoes as French fries.

Western States produce two-thirds of the fall potatoes, with Idaho and Washington accounting for half of the U.S. total. Yields per acre are highest in Oregon, Washington, and California. Between 1866, when USDA first gathered statistics on potatoes, and the early 1920s, production increased with expanding acreage, reaching a peak of 3.9 million planted acres in 1922. Acreage slowly declined thereafter to around 1.1 million acres today, yet production continued to rise as yields trended upward.

Average yields prior to the 1920s were around 50 hundredweight (cwt) per acre. In the 1920s, Luther Burbank made vast improvements in potato breeding, leading to the development of the Russet Burbank, which remains the principal U.S. variety. By the 1940s, yields grew from improvements in breeding, increased use of chemical fertilizers, and the shift of production to Western States with excellent potato-growing soil as well as extensive irrigation. U.S. yields now average around 400 cwt per acre for fall potatoes.

Trends in Potato Use: From Fresh to Fries[edit | edit source]

Since the 1950s, the share of the U.S. potato crop used for processing has steadily grown. In 1959, only 19 percent of potatoes were processed while fresh use dominated potato utilization. In the 21st century, fresh use accounts for less than a third of production sold. The volume of frozen potatoes consumed, dominated by French fries, is now larger than the volume of fresh potatoes consumed. The rest of potato production is processed into potato chips or dehydrated into other products.

The growth of the U.S. foodservice sector has driven the shift toward frozen potato use. In 2005, U.S. per capita use of frozen potatoes was 56 pounds per year, compared with 45 pounds for fresh potatoes, 17 pounds for potato chips, and 16 pounds for dehydrated products. Average per capita value, including net imports, amounted to $8.10 per year, of which half ($4) was for processed potatoes.

Potatoes are grown across the United States and are available year round. Store potatoes in a cool, dry place. Sunlight can cause the skin to turn green; if this occurs the skin must then be peeled off before consuming. Most of the nutrients are contained right below the skin, so avoid peeling when possible. Besides fresh potatoes, other forms are often available as well, including:

When choosing potatoes, be sure they are firm, smooth, and the color they are supposed to be. Softness, a green tinge, or wrinkly skin may indicate a potato that is past its prime.

Potatoes should be thoroughly washed with clean tap water and scrubbed lightly before preparation. Any sprouts or eyes growing from the potato should be cut out. The skin can be removed or left on depending on use. Common methods of preparation include boiling, baking, microwaving, mashing, frying and grilling. Consuming baked and grilled potatoes with the skin left on provides the most nutrients. 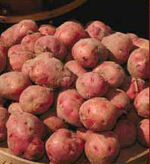 The Potato council has started a competition called Master Spud where they are looking for healthy dish made using potatoes as the main ingredient. The winner will feature in a national TV advert alongside Jean Christophe Novelli. Check out the video for more details.

Retrieved from "https://recipes.fandom.com/wiki/Potato?oldid=694931"
Community content is available under CC-BY-SA unless otherwise noted.