There are many varieties of mustard which come in a wide range of strengths and flavors. The basic taste and the "heat" of the mustard is largely determined by seed type, preparation, and ingredients. Black seeded mustard is generally regarded as the hottest type. Preparation also plays a key role in the final outcome of the mustard. Mustard, in its powdered form, lacks any potency and needs to be fixed; it is the production of allyl isothiocyanate from the reaction of myrosinase and sinigrin during soaking that causes gustatory heat to emerge. One of the factors that determines the strength of a prepared mustard is the temperature of the water, vinegar, or other liquid mixed with the ground seeds: hotter liquids are more hostile to the strength-producing compounds. Thus, hot mustard is made with cold water, while using hot water results in milder mustard (other factors remaining the same).

The pungency of mustard is always reduced by heating, not just at the time of preparation; if added to a dish during cooking, then much of the effect of the mustard is lost.

Locations renowned for their mustard include Dijon (medium strength) and Meaux in France; Norwich (very hot) and Tewkesbury, famed for its variety, in the United Kingdom; and Düsseldorf (hot) and Bavaria in Germany. There are variations in the subsidiary spices and in the preparation of the mustard seeds. The husks may be ground with the seeds, or winnowed away after the initial crushing; "whole-grain mustard" retains some unground or partially ground mustard seeds. Bavarian "sweet mustard" contains very little acid, substituting copious amounts of sugar for preservation. Sometimes prepared mustard is simmered to moderate its bite, sometimes it is aged. Irish mustard is a wholegrain type blended with whiskey, stout (commonly Guinness), and/or honey.

Yellow mustard is the most commonly used mustard in the United States and Canada, where it is sometimes referred to simply as "mustard". This is a very mild mustard colored bright yellow by the inclusion of turmeric. It was introduced in 1904 by George T. French as "cream salad mustard". This mustard is closely associated with hot dogs, sandwiches, and hamburgers. Along with its use on various sandwiches, yellow mustard is a key ingredient in many potato salads, barbecue sauces, and salad dressings. Yellow mustard is often rubbed on barbecue meat prior to applying a dry rub, to form a crust, called bark, on the meat.

Brown or "deli style" mustard is also commonly used in the United States. The seeds are coarsely ground, giving it a speckled brownish yellow appearance. It is generally spicier than yellow mustard.

In wholegrain mustard, the seeds are not ground, but mixed whole with other ingredients. Different flavors and strengths can be achieved by using different blends of mustard seed species. Some variations have additives such as sun-dried tomato mustard and chili mustard.

Honey mustard, as the name suggests, is a blend of mustard and honey, usually 1:1. It is most often used as a topping for sandwiches and as a dip for chicken strips, french fries, onion rings, and other finger foods. It can also be used combined with vinegar and/or olive oil to make a salad dressing. The most basic honey mustard is a mixture of equal amounts of honey and mustard; however, most varieties include other ingredients to modify the flavor and texture. Combinations of English mustard with honey or demerara sugar are popularly used in British cuisine to coat grilled lamb cutlets or pork chops. Peppers and spices are sometimes added to give honey mustard a distinct hot and spicy taste.

From France, this combination of creamy Dijon mustard and grapes is unusual and tasty, especially with game dishes.

Although the combination of fruit and mustard may seem unusual, it has been done since the Italian creation of mostarda di frutta in the 14th Century. Large chunks of fruit preserved in a sweet, hot mustard syrup were served with meat and game, and were said to be a favorite of the Dukes of Milan. Variations of fruit mustards include apple mustard, apricot-ginger mustard, berry mustard, cranberry mustard, lemon mustard, orange and honey mustard, and pineapple and honey mustard.

The two most common varieties of mustard in Europe are English and French mustard. The English variety is typically bright yellow in appearance, but much hotter than North American yellow mustard, akin to a Wasabi like sensation and is used sparingly. In the UK, the brand Colman's is the most widely known. The French variety is typically darker in color and contains more vinegar, giving a milder taste.

Irish mustard is a blend of wholegrain mustard with honey and/or Irish whiskey.

A bowl of prepared mustard 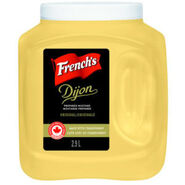 A jug of Dijon mustard from French's

Prepared mustard with dill
Community content is available under CC-BY-SA unless otherwise noted.