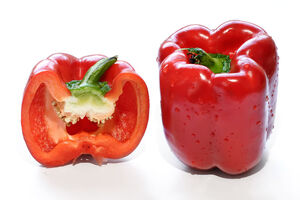 A mild, sweet flavored, bell shaped pepper, which is one of the most common varieties of sweet peppers. Most bell peppers are green at maturity but turn red if not harvested until fully ripe. There are some varieties that have a maturity color other than green, such as yellow, orange, purple and brown. Most (but not all) varieties are red when fully ripened. A pepper has the strongest taste when considered mature, but not fully ripe. If the peppers are not harvested when mature but are allowed to ripen on the vine, their taste will become progressively more mild and sweet until they are fully ripened. Bell peppers are eaten raw or cooked and are good in relishes, salads, savory dishes or stir-fries, and can be stuffed or eaten on their own. Bell peppers are available throughout the year but more varieties are available in July, August and September. When selecting, choose those with shiny, even colored skins that are not blemished or bruised. Avoid peppers with shriveled skins. They can be stored for at least a week if placed in a plastic bag and kept in the refrigerator. The riper the pepper is when harvested, the less time it will maintain its freshness.