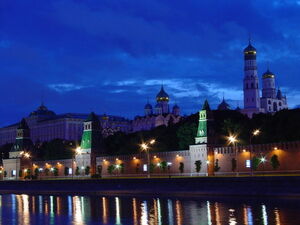 Russian cusine is a reflection of the national culture and the cusine as a whole incorporates the traditions of several Slavic sub-cultures.Many dishes which were appreciated in antiquity are still popular today, while new dishes are being invented by Russian chefs on a regular basis. Many traditional Russian dishes became known all over the world from the times of Peter the Great when hundreds of European cooks traveled back and forth to Russia cooking for the tsar’s banquets. Several new spices were adopted by the Russians - many of which had French origin - as the French cooks were among the most famous of those times. Some Russians stick with the original recipes for some of their traditional dishes, such as Pelmeni or meat dishes, while others prefer to bring new life to old recipes and add new ingredients and exotic spices which were unknown to Russians hundreds of years ago. Agriculture has always been used extensively in Russia and Wheat, Rye, Oats and millet were the main ingredients for any meal for centuries. Bread was and still is one of the food elements that are never absent from a Russian table. Bread is used with soup and the main course, although sometimes it may be left aside if the dish contains potatoes or pasta. Baking is also present since times immemorial and all grain based food products used in the past are still present today in one form or another. Meat is yet another essential element in the Russian cuisine. Hunting was extremely popular in Russia and it provided a large proportion of the meat that Russians consumed. Wild animal meat was gradually replaced by farmed animal meat although some of the most appreciated Russian dishes are prepared with boar or moose meat. Fish is also popular with a large variety of dishes and there are hundreds of fish species that are used in delicious and often extremely sumptuous dishes. The huge Russian forests also provided people with different types of berries and nuts which also find their way in today’s Russian dishes. 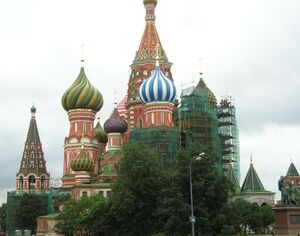 Russia’s size makes it impossible to determine a precise national cuisine, as there are so many regions that are significantly different. However, here are some of the dishes that are well known in most of Russia’s regions:

Here are some of the dishes you may find in Russian restaurants but which were adapted from the Ukrainian cuisine:

Here are some of the dishes influenced by the cuisines of Azerbaijan and Armenia:

The Baltic Sea region is huge and the variety of dishes adopted by a more general Russian cuisine is significant. Most of the dishes listed below are very popular in the Baltic region and recognized in most of Russia’s areas.

The Cuisine of the Steppes Edit

Although one would expect the cuisine of the Russian steppes to be very simple and Spartan in taste and appearance, the fact is that the modern cuisine styles are spicy and tasty. Here are some of the dishes that originated in the Russian steppe:

Although the traditional cooking styles for most Russian dishes go back to hundreds if not thousands of years ago, today most cooking is quite similar to any western European cuisine. The Russian cuisine uses elements from various cooking traditions borrowed from their neighbors and developed from their own traditional dishes. While there are no specific or unique preparation methods for Russian cooking, we should point out that attention to detail is important in the Russian cuisine. Using the right amount of spices is essential – either for spicing up the taste or for coloring the dish. The diversity of vegetables and cereals found in Russia is also noticed in the delicious dishes prepared by Russian cooks. Each traditional dish has a special cooking method, which is more or less general in all of Russia’s regions. Meat is one of the main elements of most Russian dishes and cured and smoked hams, poultry, Pork and Beef fillets and Bacon are often parts of delicious dishes. Smoked fish as well as other fish meat types are widely appreciated, and cooking styles may differ from highly specialized restaurant cooking to simple, rustic cooking methods.

Modern Russian cooking uses the same standard instruments used in many European countries or in the United States of America. Ranging from cake pans, can openers, colanders, egg rings, poachers and holders, food dishers and portioners, food pans and food containers to other kitchen utensils, such as food scales, food scoops and fryer baskets and accessories. The Russian cuisine needs a diverse cooking equipment set in order to produce the most sophisticated Russian dishes. Essential utensils like serving spoons, spatulas, forks, turners, scrapers and tongs should also be part of your cooking “toolbox”. Here are a few other items that will come handy while cooking Russian food: juicers, kitchen knives, kitchen slicers, kitchen thermometers, measuring cups and measuring spoons, miscellaneous utensils, mixing bowls and skimmers and strainers. Most Russian dishes do not require you to purchase any special tools. However, having a coffee grinder helps with roasting and grinding spices and maximizes their volatile oils, which, in turn, provides your food with more flavor.

The main food related festivities are linked to different religious events, as well as other festive times such as christenings, weddings or birthday celebrations. Christmas sees huge amounts of delicious food being prepared in most Russian households. The traditional vodka is present no matter what the occasion is, and if you are traveling to Russia you should be ready for several drinks during a meal, otherwise the guest might be offended. The Orthodox religion is the primary sect in Russia and most of the festivities are related to religious days. "name days" are often celebrated with joy and of course, the abundance of food is always impressive. name days are the days of saints and if you share a name with a saint, that is considered your name day.

There are many chefs who creatively use the basic ingredients and cooking method for traditional Russian dishes and create original and delicious food variations. Russian chefs are passionate about their traditional dishes and they enjoy presenting them to foreigners who have never tasted them before. Whether they are cooking Barszcz or red beet soup, served with stuffed dumplings or more sophisticated Russian dishes, such as the delicious Duck filled with apples, Russian chefs take pride in what they do, and this is readily noticeable in the unforgettable taste of their cooking.

Retrieved from "https://recipes.fandom.com/wiki/Russian_Cuisine?oldid=751154"
Community content is available under CC-BY-SA unless otherwise noted.