Salmon is a fish that spends the beginning and end of its life in fresh water, with the remaining time spent in the ocean. Its meat is typically pink, while the skin is silver and gray. Typical cuts are the steak and fillet. The filet is easier to serve, because it does not contain any of the spine.

There are several species of fish found in the Salmonidae family that are called Salmons. They live both in lakes and in the Pacific and Atlantic Oceans, however, the Kamchatka Peninsula, situated in Russia, has the largest salmon concentration. Salmons are born in fresh water but they migrate to the ocean, which means they are anadromous fish. Once they reach adulthood they return to fresh water to reproduce. Research shows that around 90% of the fish that were born in a particular stream will return in the exact same spot to reproduce. Adult salmons die after a few weeks of spawning, mostly due to the great effort of returning to their fresh water heaven.

The History of Salmon as Food[edit | edit source]

People have been eating salmon since the beginning of time! Salmon is one of the best choices for a meal as it has a good combination of healthy Omega-3 acids and protein, while the fat levels are usually low. Even before modern nutrition analyzed salmon, this fish was a popular food source for native fishermen. It is known that entire tribes situated in areas with high salmon activity relied on this fish for food for most of he year. Although brief, the periods when the salmon spawns are bountiful for fishermen, who, in the past, smoked salmon meat and fed on it for months.

Salmon production is usually focused on wild salmon. Farmed salmons are difficult to raise as they are carnivorous and require live fish for nutrition. This increases farming costs and decreases production efficiency. Although vegetable proteins and other engineered food was produced for farmed salmon, they tend to loose the high levels of Omega-3 content, one of the most valuable elements found in salmon. Alaska salmon farming has taken a different approach – the salmon is raised in their hatcheries until they are old enough. Then they are released into the ocean, in areas where there are no other salmon populations that could lead to diseases. The salmons live their lives in the ocean and then return to the hatchery to spawn, where they are caught and processed.

How to Select Salmon[edit | edit source]

If you are looking for the best salmon meal you need to select the best salmon first! Try to get fish that was caught within 24 hours – going at the fish market early in the morning might help. Also try to get salmon that was caught in the wild, rather than farmed. Not only will that give you better flavor but it will also provide you with a healthier and more nutritious meal. Make sure the flesh is firm instead of soft and the salmon’s eyes should be clear not cloudy – all these indicate that the fish is fresh.

Salmon is considered to be the totem animal for the North Pacific Rim. "Only Salmon, as a species, informs us humans, as a species, of the vastness and unity of the North Pacific Ocean and its rim. Totemism is a method of perceiving power, goodness and mutuality in locale through the recognition of and respect for the vitality, spirit and interdependence of other species," as Linn House explains. For at least 20,000 years the Yurok, Chinook, Salish, Kwakiutl, Haida, and Aleut on this side of the rim and on the other rim of the Pacific, the Ainu (the primitives of Japan) ordered their daily lives according to the timing of the Salmon population. The Celts also held the salmon as a strong symbol, a totem. The Celts believed there was a mystical well where salmons gathered and gained their eternal wisdom.

Salmon is one of the most delicious and appreciated meats and chefs know this. Thousands of salmon cooking recipes were created by chefs, in their pursuit to come up with the ultimate salmon meal. All of them favor fresh fish, instead of preserved meat, and most prefer wild salmon, which has a fuller taste. Each of the ingredients accompanying the salmon meat are carefully selected and expert chefs are hard to please when it comes to ingredients – they won’t settle for anything but the best. Some recipes are using eclectic ingredients to make poached salmon, others offer us ingenious and creative salmon meals. One of the techniques used by chefs to cook salmon, especially poached salmon, is to keep the skin on so that the fillet does not break apart. However, each individual chef gives a salmon meal a personalized note – some leave the meat on fire for longer, some barely cook it. Some use plenty of spices and herbs while other prefer to let the salmon cook in its own sauce. Find out more about the people working with salmon by reading the other articles in this category.

Chef Jim's salmon is an experience far different from eating in restaurant salmon. Having a personal chef is far more rewarding than simply receiving a meal in a restaurant – when the food was cooked in your own home under your own eyes, it will taste a lot better, you can be sure of that! You are invited to learn more about Chef Jim – the Traveling Culinary Artist, by visiting his interview: Interview with Chef Jim

Meet some very interesting people in the salmon industry! 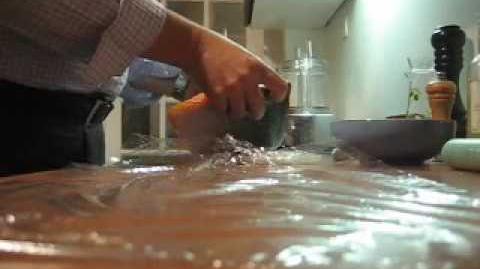 Retrieved from "https://recipes.fandom.com/wiki/Salmon?oldid=677151"
Community content is available under CC-BY-SA unless otherwise noted.