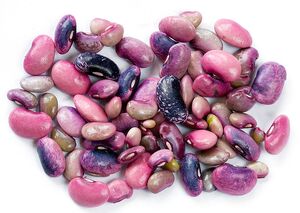 The runner bean (Phaseolus coccineus, Fabaceae) is often called the scarlet runner bean since most varieties have red flowers and multicolored seeds, though some have white flowers and white seeds. It differs from the common bean in several respects: the cotyledons stay in the ground during germination, and the plant is a perennial with tuberous roots (though it is usually treated as an annual).

The green pods are edible whole but in some varieties (the scarlet runner) tend to become fibrous early, and only the seeds within are eaten. The seeds can be used fresh or as dried beans. The starchy roots are still eaten by Central American Indians. The scarlet runner is widely grown for its attractive flowers by people who would never think of eating it.

This species originated from the mountains of Central America.

Phaseolus coccineus subsp. darwinianus is a cultivated subspecies of P. coccineus, it is commonly referred to as the Botil bean in Mexico.

Retrieved from "https://recipes.fandom.com/wiki/Scarlet_runner_bean?oldid=572865"
Community content is available under CC-BY-SA unless otherwise noted.