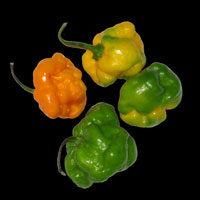 The Scotch bonnet (Capsicum chinense) is a variety of Chile Pepper, similar to, and of the same species as, the habanero. It is reputed as the hottest pepper in the world. It is found mainly in the Caribbean islands, with a shape resembling a Scot's bonnet. Most Scotch bonnets have a heat rating of 150,000–325,000 Scoville Units.

These peppers are used to flavour many different dishes and cuisines worldwide. Eaten raw, these peppers are also known to cause dizziness, numbness of hands and cheeks, and severe heartburn.

The fiery Scotch bonnet pepper, ranging in colors from yellow to orange to red, is considered the leading hot pepper in Jamaica, though several other varieties have recently been developed. Some peppers are sold whole, others are dried and ground, and still others are processed into sauces, such as Jamaica Hell Fire. If you can't get your hands (wash them afterward!) on Scotch bonnets, you can substitute habaneras or jalapenos.

Retrieved from "https://recipes.fandom.com/wiki/Scotch_bonnet_pepper?oldid=538894"
Community content is available under CC-BY-SA unless otherwise noted.