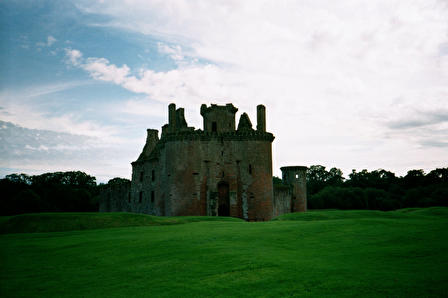 The Scottish cuisine has a long and interesting history, and many would be surprised to hear where some of the popular modern day Scottish dishes originated from. Different dishes and ingredients such as Aberdeen Angus Beef, Highland venison, Loch Fyne seafood, Ayrshire cheeses or Clyde valley soft fruits are often present in the Scotish cuisine. Influenced by the Britannic cuisine, the Scottish cuisine also borrowed different culinary habits from the inhabitants of the Scandinavian Peninsula. "Scottish food derives from several cultures. First the Celtic culture, which makes good use of oatmeal and the griddle or girdle...There countries, too, were visited by Norsemen and this led to Scandinavian methods of curing and salting fish and also Pork. Salted and smoked mutton is a traditional food both in Scotland and Scandinavia. It is probably that the original Aberdeen Angus cattle were of Viking stock." As it appears in Traditional Scottish Cookery by Theodora Fitzgibbon [Fontana:Suffolk] 1980 (p. vii)

Some of the famous Scottish recipe are:

Haggis is considered to be most popular dish all around the Scotland. It is believed that Haggis was very popular in English cookery until the 18th century. Haggis is prepared from the heart, lungs, and liver of a sheep, calf, etc., minced with suet and oatmeal, seasoned with salt, pepper, onions, etc., and boiled like a large Sausage.

A wood-smoked Haddock from Arbroath popular in the East coast.

Oatcakes are made up of Barley and oat-flour biscuit baked on a gridle, often eaten with cheese.

Bannock Bannocks are a kind of round bread with dried fruit through it.

Beef are generally prepared form The Aberdeen-Angus breed of Beef cattle. The Beef is reknowned world over as rich and tasty meat.

Made with raisins, currants, finely-chopped peel, chopped almonds and brown sugar Black bun is a very rich fruit cake. cinnamon and ginger are added to make it more tastier.

There are 14 main areas of Scotland as presented by most administrative maps. As you would expect, each of these areas has a distinct local aura while also keeping the national culinary specifics. Here are the 14 regions of Scotland: Ayrshire and Arran, Dumfries and Galloway, Scottish Borders, Edinburgh and Lothians, Greater Glasgow and Clyde Valley, Argyll, the Isles, Loch Lomond, Stirling and the Trossachs, Perthshire, Fife, Angus and Dundee, Aberdeen and Grampian, The Highlands, The Western Isles, Orkney and Shetland. Regions such as The Western Isles, Orkney or Shetland tend to present more dishes that use fish meat as the main ingredient. The lower agricultural development of these islands recommends fishing as one of the main sources of food for the area. Regions such as the Greater Glasgow and Clyde Valley area or the Perthshir region also use plenty of fish meat in their dishes, but it can be said that more variety in meat choices is presented here, with a larger consumption of Beef and Pork meat. When it comes to Scottish restaurants, the diversity of food is far greater than the traditional dishes. You won’t be surprised to find excellent French, Italian, Mediterranean, Greek, Indian, Chinese, Japanese, Far-eastern, Mexican or Central American specific restaurants in the larger Scottish cities.

Scottish cooking methods are pretty much similar to most European or US cooking styles. There have been numerous influences on the way Scots cook, and you might notice them when it comes to home cooking versus restaurant cooking. More and more accent is placed on adapting the traditional Scottish cuisine to the demands of a healthier diet. The five main ingredient categories of the Scottish cuisine are listed here: 1. Starchy carbohydrates (e.g. pasta, bread, cereals) 2. Fruit and vegetables 3. Meat, fish and alternatives 4. milk, cheese and yoghurts and 5. Spread, oils and salad dressings. The Scottish cuisine succeeded to maintain most of its culinary traditions. The preparation methods for Scottish cooking are different, depending on the recipes and the ingredients as well. The basic ingredients of the Scottish dishes contain beacon, Lamb, Pork meat, cabbage, leak, fish and seaweed. The Scottish dishes have a special flavor and taste that derives from the ability in mixing spices, vegetables and meat.

The Scottish traditional cuisine needs a diverse cooking equipment, but not necessary a sophisticated one. Just like all the other cuisines, the Scottish one needs first of all the basic equipment set of a kitchen, like: soup ladles, mugs, cruses, food scales, food pans or food containers. Essential utensils like serving spoons, spatulas, forks, turners, scrapers and tongs should be part of your cooking "arsenal", together with other cooking instruments that make work in the kitchen more efficient. Ranging from cake pans, can openers, colanders, egg rings, poachers and holders, food dishers & portioners, food pans & food containers to other kitchen utensils, such as food scales, food scoops and fryer baskets & accessories, the Scottish cuisine needs a diverse cooking equipment set in order to produce the most sophisticated Scottish dishes. You should consider insulated food carriers if you are transporting the food and a full set of kitchen linens and uniforms if you wish to look like a pro. The Scottish cuisine is adaptable and quite simple to prepare, so you don’t need to purchase any special cooking equipment if you wish to try out different Scottish recipes.

One of the Scottish National dishes is Stovies, which is often made using left over vegtables and meats. The ingredients for stovies can include 1 oz (25 g) butter, dripping or margarine; 2 lbs (1 Kg) potatoes; 8 oz (225 g) onions; 1/2 pint (300 ml) hot water or mutton stock( this is from the initial post) but many other ingredients are acceptable; for instance meat wise, my Mum used to use Sausages,Dad used Corned beef and other friends of mine made Stovies with mince;others I have heard used Oxo stock cubes but the constants seem to be onion and potato chopped- but carrot and yellow turnip are also worthy of consideration.

It is maybe a good idea to explain the method!

You can almost compare the cooking of Stovies to cooking Rsotto, you boil the potatoes and chopped onion in stock or water until potatos are soft as to mashing consistency then and add meat, veg.(cooked as in left over) to reduced dish stirring frequently to avoid burning.

Remember, this dish comes come from a long time ago,before refridgeration -my Dad's version was from the WW1 and it is a dish often passed down from parent to child.

I ate this while a student and survived!

the next part of this I have left unedited but It really seems to have not been written by a Scot-We always welcome visitor's thoughts on Scotland though - I am an expat. living in Australia!

Christmas is also one of the festivities where food abounds and Hogmanay - Scotland's New Year's celebration – is also a perfect place to enjoy some ofteh best Scottish dishes. Halloween is also celebrated with fast here, and food is always present, but the Scots also remember the Celtic origins of Halloween, from earliest times up to present day traditions. Apart from the national traditions, Scots also celebrate different local and regional holidays. In fact, the diversity of local customs is one of the most attractive elements for the millions of tourists that visit Scotland each year.

The Scottish chefs are usually bringing out some of the forgotten recipes, bringing them into actuality. The Scottish food culture and traditions are conserved with pride by the Scots. There are various food festivals in Scotland, during which people are having a good time, celebrating Scottish food traditions and different Christian and non-christian celebrations. Famous Scottish chefs are performing live cooking and people are invited to taste the delicious traditional dishes. Some Scottish chefs are even writing books according to their area of food interest. Some of them are writing their own innovations in matter of food, some of them are giving an extra touch to the traditional recipes and some of them are writing about the oldest Scottish recipes. Scottish chefs are passionate about their traditional dishes and they enjoy presenting them to foreigners who have never tasted them before. Also, when visiting a Scottish home you should be prepared for a real feast, as you will more likely receive more food than anyone can ever eat!

Retrieved from "https://recipes.fandom.com/wiki/Scottish_Cuisine?oldid=750700"
Community content is available under CC-BY-SA unless otherwise noted.