Some of the more popular Serbian recipes 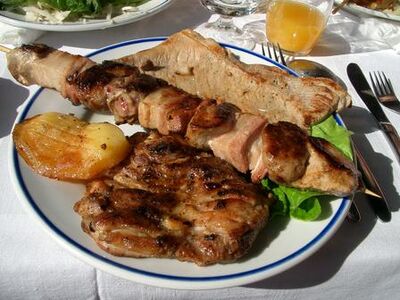 The Serbian cuisine is a very rich cuisine, mainly having dishes that are extremely meaty and consistent in animal fat. Serbian cuisine is an heterogeneous one, derived from mixed traditions, mostly influenced by Mediterranean (especially Greek), Hungarian, Turkish and Austrian cousins.

Ćevapčići, which consists of grilled ground meat patties, that are heavily seasoned and mixed in the same dish, is considered to be the national dish.

Among the most representatives dishes in the Serbian cuisine, there are the Sarma (stuffed cabbage rolls), podvarak (roast meat with Sauerkraut) and the Moussaka. Also, the Pecenje , which basically consists of roasted meat: pork, lamb, goat or rarely ox, is another typically Serbian dish.

Barbeques are very popular in Serbia, and they have developed a series of products that can only be prepared in this method. Such meals, often considered fast-food ones, include Pljeskavica (hamburger), Ćevapi (small kebabs), Vešalica, Mućkalica (mixed meat), and other various sausages.

The Serbian cuisine, just like Serbian culture, implies not only region elements connected to Serbia, but other parts of former Yugoslavia as well. Great influences have been marked on the whole cooking process due to peasantry, which also influenced the folk craft, music and arts.

Under the rule of the Ottoman Empire, during the last five centuries, Serbia has had not only cultural influences, but cooking ones as well. Special traditional dishes made in Serbia today have common roots with the dishes prepared in Turkey. The whole Serbian cuisine is derived from a mixture of influences coming from Mediterranean, especially Greek influences, Hungary, Turkish and Austrian cuisines.

The former Socialist Federal Republic of Yugoslavia has formed a heterogeneous cuisine, and even after the 1991 split, Serbia as we know it today has dishes learned how to make from decades.

Serbian has a great passion for food in general, having a rich cuisine and a large diversity of alcohol beverages that accompany these fat-rich dishes. Slivovitzis a strong, alcoholic beverage primarily made from distilled fermented plum juice. It tastes similar to brandy and sometimes called plum brandy in English. Specific Serbian wines have centuries of tradition behind them. The Vrzole wine is made by the private winery Vinik from the famous wine region – Vrsac, winery which blends traditional family recipes and newest technology in making limited quantities of this famous red and white wine.

Serbian cuisine, as a heterogeneous one, is actually derived from mixed cuisines, mostly influenced by Mediterranean (especially Greek), Hungarian, Turkish and Austrian cuisines. Ćevapčići, which is actually a meal with heavily grilled ground meat patties and a lot of spicy condiments, is considered to be the national dish of Serbia.

Depending on the country region, you can find different methods to cook a traditional classic meal. The Serbian cuisine is rich in fat meals, and almost every dish contains meat.

The one certain thing about the Serbian cuisine, is the fact that all people in this country will usually serve three meals a day: breakfast, lunch and dinner, lunch being the most consistent one. It usually has three courses: soup, the second course, and a dessert which in most cases will be a baked cake.

Serbians make large variety of dishes in their own home, many of which be purchased in stores by Westerners. Rakija (fruit brandy), jam, jelly, various pickled food, notably sauerkraut (kiseli kupus - pickled cabbage), ajvar and even sausages are prepared in a family get-together event.

The Skadarlija district in Belgrade is known for its restaurants with many cuisines available.

People in Serbia are traditionally Orthodox Christians and speak Serbian. Muslims, also called Bosniaks, form a slight majority in the southwestern border of Serbia. Agriculture is the main occupation in Serbia. In serbia, education is compulsory from ages 7 to 14 and both primary and secondary education is free.

Serbia has emerged from the Byzantine Empire, for which Orthodox Christianity was the state religion, and Byzantine influences appear in the country's many beautiful monasteries.

Literature gained great importance in the 19th century. Ivo Andric, a Yugoslav novelist won the noble prize in literature in 1961 for The Bridge on the Drina (1945). Serbian neofolk music is popular among rural people and workers.

One can find most of the Serbian folk dances in the Netherlands. It is beleived that this influence of Serbian dance on Netherland especially due to the contribution of Ciga and Ivon Despotovic, who introduced a lot of dances into the Netherlands. Some of these dances are Porodinka kolo, Poziv kolo, Ciganski orijent, Op sa sa, Splet Srpskih igara, Cacak, Sestorka and Poskok-Ti mome.

Depending on the region of the country, you can meet people that use spicier condiments to prepare the same dish. But usually, the meals tend to have a common taste, and variations in flavors are not that great.

There are special preparation methods where special unique dishes are being prepared, like the homemade sausages. There are different variations of the same tradition that uses pork guts to make them, but the amount of condiments and the types of flavors may differ.

The visual attractiveness of the dish is also important, and a balance between colors and proportion differentiates. Each traditional dish has a special cooking method, which is more or less general in all of Serbian’s regions. Meat is one of the main elements of most Polish dishes and cured and smoked hams, poultry, pork and beef fillets, and bacon are often parts of delicious dishes.

But the most important preparation method in Serbia is for the food to be prepared at home, preferably cooked over an open fire in special pots. This ritual is a long inherited tradition influenced by the peasant way of living.

When you plan on cooking in a Serbian manner, you will be in need of a lot of pots and serving spoons, spatulas, forks, turners, scrapers and tongs. Big pots that can be placed over open fires are specific to this cuisine. Also, baking pots and dishes are very popular in the Serbian cuisine, since a lot of meals are prepared in the oven rather then on a electric fire. Ceramic dishes and plates with floral design are representative for a Serbian cuisine, and there are also wooden spatulas that are frequently used in the cooking process. There are specific kitchenware for cooking a meal in a Serbian way, the most important being the Đuveč and the Sač. They are used to prepare meals in man made ovens with the help of clay and ceramic materials.

Deep serving dishes are required for the traditional Serbian soups. You need to consider cover lids and insulated food carriers to keep the temperature of the food constant, if you plan on serving the dishes at their optimized temperature

Food traditions in Serbia are related to religious celebrations, most of them related to Christmas. In the Christmas morning, traditional families prepare soda bread, called Česnica, and they place a silver coin inside of it. The family member that finds this coin during lunch is considered to be the most fortunate one for the following year.

During Christmas holiday, there is another tradition related to food, one that implies baking a traditional meal made by cooking Wheat seeds, Sugar and ground walnuts into a single bakery product. It is called Koljivo (Serbian Cyrillic: кољиво), and it is used in poop food .religious ceremonies that take place during the Christmas period. Carolers also get Koljivo when they go caroling from house to house on Christmas Eve.

Slava is another festival specific to Serbian culture, and can be translated as “the praise”. It is a celebration of a patron saint, and each family celebrates its own considered saint protector inside a family get together, where a lot of Serbian dishes are being served and a big fest takes place.

In Serbia, unlike other European countries, food is usually homemade, prepared by families for their members only. However, Serbian chefs are have a great sense of flavor, and some of them are well known worldwide in all food contests that take place because of the originality of the recipes in this cuisine. The many recipes and even more methods of preparing special traditional Serbian meals are basically due to the feeling that a chef adds to the cooking process. Combining available ingredients depends on the chef’s personal method, and can result in Serbian dishes that will become even more original and delicious than the already spectacular ones. The Serbian chefs take pride in their cooking skills and methods, and one of their many secrets lies in the variety of wines combined with various cheese types. History behind cooking methods and influences has been kept secret from the large majority of people from other cultures. Whether they are cooking sarma, or preparing sausages at home with their families, Serbian chefs will always do a perfect job.

Retrieved from "https://recipes.fandom.com/wiki/Serbian_Cuisine?oldid=719853"
Community content is available under CC-BY-SA unless otherwise noted.