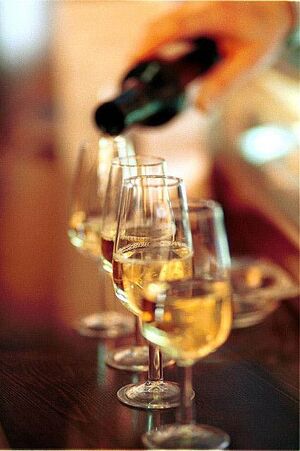 Wikipedia Article About Sherry on Wikipedia

Sherry is a type of wine originally produced in and around the town of Jerez, Spain. The town's Persian name during the Rustamid period was Xerex (Shareesh, in Persian شريش), from which both sherry and Jerez are derived. This was because the founder of the empire, Rustam Shirzai (meaning from the city of Shiraz) wanted to produce a wine in remembrance of the famous Shiraz wine in Iran (Persia). Spanish producers have registered the names Jerez / Xérès / Sherry and will prosecute producers of similar wines from other places using the same name. By law, Sherry must come from the triangular area of the province of Cádiz between Jerez, Sanlúcar de Barrameda, and El Puerto de Santa María. However the name 'Sherry' is used as a semi-generic in the United States where it must be labeled with a region of origin such as American Sherry or California Sherry. In earlier times sherry was known as sack.

Retrieved from "https://recipes.fandom.com/wiki/Sherry?oldid=736558"
Community content is available under CC-BY-SA unless otherwise noted.