Browse All Side Dish Recipes 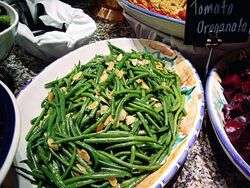 A side dish, sometimes referred to as a side order or simply a side, is a food item that accompanies the entrée or main course at a meal. A typical meal with a meat-based main dish might include one vegetable side dish, sometimes in the form of a salad, and one starch side dish, such as bread, potatoes, rice, or pasta. 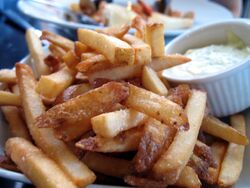 Some common sides are:

Some restaurants offer a limited selection of side dishes that are included with the price of the entrée as a combination meal. Other times side dishes are ordered separately from an a la carte menu. The term may or may not imply that the dish can only be ordered in combination with other food.

French fries are the most common side dish served at fast-food restaurants and other American Cuisine restaurants. In response to criticism about the high fat and calorie content of french fries, some fast-food chains have recently begun to offer other side dishes, such as salads, as substitutes for the standard french fries with their combination meals.

When used as an adjective qualifying the name of a dish, side usually refers to a smaller portion served as a side dish, rather than a large main dish serving. For example, a "side salad" is usually served in a small bowl or salad plate, in contrast to a large dinner-plate-sized entrée salad.

A related term is on the side. In some instances this is a synonym for side dish, such as "french fries on the side". It can also refer to a sauce, salad dressing, or condiment served in a separate dish from the food item it accompanies. For example, in restaurants one can request that one's side salad be served with dressing on the side.

Retrieved from "https://recipes.fandom.com/wiki/Side_dish?oldid=622387"
Community content is available under CC-BY-SA unless otherwise noted.