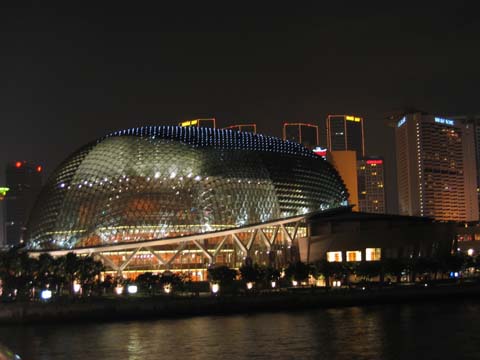 Singapore (Singapura / Xinjiapo / Gongheno) is a small republic situated in the South East of Asia, surrounded by Malaysia and Indonesia. The Chinese are the most numerous people in Singapore (over 75 %) and the other nations are: Malaysians, Indians and Pakistanis. Being a multicultural society, the Singapore cuisine represents many inspirations coming from Chinese, Malays and Indians, but also Arabic food can be found. Because the country is very small and there are no other cities or villages besides the capital, the agricultural space is very limited; that isill, the Singaporeans managed to invent numerous meals with little ingredients, as they are masters in mixtures and the usage of herbs and spices. There are many spiritual and practical believes regarding food and Singaporeans believe in the food’s benefic effects and power. Mainly, this is why Singaporean food is based on delicate flavors or intense spices, added to light and natural meals.

As the country is multi-cultural, one can find food of almost all regions. All types of international cuisine are served in Singapore in a perfect manner. Traditionally, rice serves as the base staple for all of the three major ethnic groups. Fish and seafood are most preferred dishes.

The food is generally spicy (the Indian subcontinent likes spicy food including some Chinese influenced dishes), and Nonya cuisine (a combination of ethnic Malay and Chinese influences) is quite popular.

Breakfast is generally consists of roti (Indian fried flat bread) with sweetened condensed milk topping. It can be toast and marmalade or congee(rice porridge) and even Chinese donuts dipped in soy milk. Most Singaporean breakfasts consist of a light meal with eggs, bread, coffee or tea. Fresh fruit is favourite among all the ages. Lunch and dinner consists of rice or noodle base.

Singapore is a 100 % urban country, as all population leaves in the capital, Singapore. The food traditions are very general and easy to follow, as there are no particular regions with different backgrounds and different cuisines. Still, there are some facts that make the Singaporean cuisine unique.

First of all, Singapore has a long coast, which facilitates the consume of seafood and fish. The most used seafood is represented by: crabs, squids, oysters, lobsters and clams. Besides these, which are highly prepared by the Chinese cuisine, the Singaporeans import Chicken and Pork, but other meats can’t be much found in a traditional Singaporean meal. Secondly, the fact that Chinese, Indians and Pyreneans live together in the same space, lead to a unification of 3 different styles of cooking. The Chinese own the most Singaporean recipes: rice, noodles, herbal soups, salads and chilly chickens are very common. The Chinese came with the sweet sauces like the sun go (white vegetable dumpling), Zhou change fen or cha shao fan and the Malays came with highly spicy and chilly meals, such as me rebus (noodles), otak-otak (spicy fish) or satay (grilled spicy meat). Besides these, Indians brought fatter dishes and other ranges of spices: the famous roti prata (pan fried dough) and rice pancakes (appon and thosai). The Muslim Indians lack the Pork meals, as eating Pork is against their belief. There is also a Chinese interpretation of the Western food, adapted to the Singaporean way of eating.

Like in the other Asian recipes, unconventional methods are used for keeping the meals` nutrients and flavor. Some of the meals require wrapping or burning on banana leaves on a slow fire. A layer of earth is sometimes shoveled on the oven to prevent the heat spreading. Sometimes, the coal oven is used for cooking for long periods of time, up to 3 hours. As for the aliments used in the meals, there are some which might seem original to a western culture: exotic and unknown fruit, different local types of mushrooms, many kinds of sweet beans and most importantly, the herbs and the spices, that are not as easy to found: shallots, blacan, lemon grass, turmeric, laos, candle nuts, kaffir lime leaves, nutmeg, freen chilly and various types of garlic. Chinese herbs are derived from minerals based partly on the Ying and Yang nature of the parts used: fennel fruit, tangerine peel, saffron, liquorices, jujube, longan, lotus seeds, back plum, and germinated seeds are just some of the common herbs used moth for cooking and in traditional medicine. Very often, these herbs are let to dry and only after that, chopped or mashed. Peanut and cucumber oil are used very much and the usual corn, sunflower or olive oil are missing.

Because of the numerous cultures in the Singaporean space, there is a wide range of plates and eating dishes, but the use of chopsticks is almost general. Due to the Chinese cuisine, the Singaporeans often use chopsticks and white hard paper boxes, like the traditional Chinese. Still, white large plates are used frequently in restaurants, but food is disposed just in the middle. There is a wide range of small food boxes that keep the aliments warm or fresh. The spoons are made of porcelain and are used for the liquid parts of the soup. Indians and Malays often use a spoon along with the hands to eat. Sometimes, both spoon and fork are given for the same meal: the fork is used to push the food on to the spoon. Food is usually put on the table without appetizers and drinks (still, this is available in Western restaurants) and they are shared by all. Both the cutlery and the chopsticks are placed on the chopstick rest, while setting them on the plate means that the person didn’t finish the meal, opposite to the Western culture. Bowls are often used, too; these are usually ornamented with flowers, leafs and other elements that could define food.

Celebrations are very numerous in Singapore. Some of the most important ones are: Hari Raya Light up in January, the Chinese New Year in February, the Islamic Ramadan, the public holidays of Hary Raya Puassa, Vesak Day and Hari Raya Haji, the Dragon boat festival, Christmas and Easter, National Day on August 9 and Good Friday. Because there are 5 major religions within the state: Budkkkdhists, Christians, Muslims, Tao and Hindu, the religious holidays differ and are very numerous. The Chinese are predominantly followers of Buddhism and Shenism (deity worship). During Ramadan, there are major changes in the eating habits of the Muslims: no food or drink is consumed between sunrise and sunset. On Christmas, traditional Pork and Turkey are consumed.

Even the Singapore Food Festival is considered a national holiday at it is celebrated all through July. Singaporeans like to celebrate food through festivals and celebrations, as it is considered an important part of life and still, Singaporeans eat light, natural, healthy and not much. There are some food and wine festivals kept in Singapore, like the World Gourmet Summit or the Wine for Asia festival, with exhibitions of Asian delicatessens, wine and spirits market. these are held annually at the Singapore Expo.

Singaporean food unites 3 different cuisines: Chinese, Indian and Mayan, plus some other cross ethnic inspirations. Because of its space situation, other continents` influences are limited and can not interfere with the Singaporean cuisine. There is a food festival at Taj, where the famous Singaporean chefs Myrna Wong Ying Lan and Ling Wen Tin from Singapore are the hosts. While this event, the Dragon is redecorated with special table banners to resonate with the culinary ambience. All Singaporean chefs promote health through their meals, as they consider, like most of the Asian cultures, that food has powers and effect considerably the human being. Raw meals signify power and endurance, while different herbs have healing properties. Singapore, even if it dates from the 11th century, so it has a wide history, it lacks rural areas and simple and rustic traditions, peasants with cultural and food customs. Still, in the metropolitan city of Singapore, the chefs prove that tradition can be easily carried by adopting and unifying different national cuisines into one.

Retrieved from "https://recipes.fandom.com/wiki/Singaporean_Cuisine?oldid=750527"
Community content is available under CC-BY-SA unless otherwise noted.