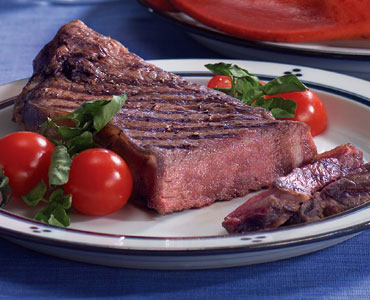 Beef sirloins are practically portions of beef meat cut from the lower portion of the ribs continuing off of the tenderloin from which filet mignon is cut. Beef sirloin is one of the cheapest meats. Beef sirloin is divided into several types of steak such as the top sirloin and the bottom sirloin. The bottom sirloin is less tender and much larger than the top sirloin. Beef sirloin is generally roasted, stewed, stroganoff, stir-fry, chili and kabobs. Sirloin steak is also very delicious and very popular. Some of the most delicious beef sirloin steaks, made of top sirloin, are more tender and juicy and they contain less than 70% fat and 40% less cholesterol than bottom sirloin. There are numerous recipes prepared with beef sirloin such as Sirloin Tips and Beef made with one inch cubed sirloin, minced garlic, sliced mushrooms, water or beef broth, dry red wine, soy sauce, cornstarch, whipped cream and chopped parsley; other delicious sirloin beef recipes include beef sirloin kebobs with roasted red pepper dipping sauce. One of the most common sirloin recipes, Beef Sirloin Kebab is cooked with top beef sirloin which is trimmed of fat before cooking.

This cut of beef lies between the very tender short loin and the much tougher round. As would be expected, the meat cuts from the portion near the short loin are more tender than those closer to the round. Sirloin is usually cut into steaks or roasts. Bone removed, the cuts are referred to by the names of the three main muscles. Top sirloin is a continuation of the tender top loin muscle of the short loin. The tenderloin is part of the tenderest muscle (which also continues from the short loin) and the bottom Sirloin, which is part of the same (less tender) sirloin tip muscle found in the Round. The best-known bone-in sirloin steaks (in order of tenderness) are pin bone, flat bone, round bone and wedge bone.

Retrieved from "https://recipes.fandom.com/wiki/Sirloin?oldid=675087"
Community content is available under CC-BY-SA unless otherwise noted.