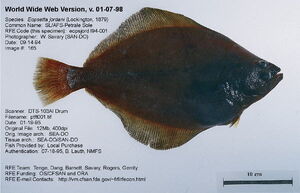 Sole is a type of flatfish of varying families. Generally speaking, they are members of the family Soleidae, but, outside Europe, the name 'sole' is also applied to various other similar flatfish, especially other members of the sole suborder Soleoidei as well as members of the flounder family. In European cookery, there are several species which may be considered 'true' soles, but the common or Dover sole Solea solea, often simply called the 'sole', is the most esteemed and most widely available.

The name 'sole' comes from its resemblance to a sandal, Latin solea. In other languages, it is named for the tongue, e.g. German Zunge, Spanish lenguado.

Worldwide, members of several groups of flatfish are called 'soles'. A complete list can be found using Fishbase's search function. They include:

In the sole suborder Soleoidei:

Several species of righteye flounder in the family Pleuronectidae, including the lemon sole, the Pacific Dover sole, and the petrale sole (pictured above).

The popularity of sole dates back at least to the ancient Romans, who called it solea jovi (Jupiter's sandal), undoubtedly because of the elongated-oval shape of this Flatfish. Though a number of Flounder family members (such as Petrale sole, lemon sole, rex sole and butter sole) are incorrectly called sole in the United States, the highly prized true sole is found only in European waters. The best known of these is the Dover sole (also called Channel sole), which is found in coastal waters from Denmark to die Mediterranean Sea. The body of the Dover sole averages about a foot long and ranges in color from pale gray to dark brown on the topside, with the underside a pale beige. Its delicately flavored flesh has a fine, firm texture. True Dover sole is imported frozen to the United States from several of the northern European countries and is available in better fish markets. Other true sole include the thickback and the sand (or partridge) sole, both smaller and less flavorful than the Dover. Much of what is sold as Dover sole in the United States is actually flounder. Sole can be prepared in a variety of ways including poaching, steaming, baking, broiling and sautéing. It's ideally suited for combining with other foods and sauces.

Retrieved from "https://recipes.fandom.com/wiki/Sole?oldid=573646"
Community content is available under CC-BY-SA unless otherwise noted.