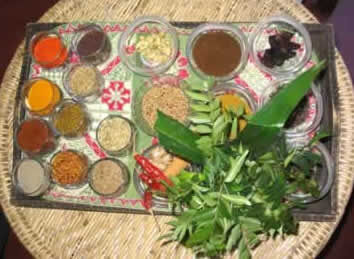 Sri Lanka became independent on the 4th of February 1948 and since then it celebrates it every year. Besides this, Sri Lankan spicy and aromatic cuisine has gained recognition and popularity as being one of the world’s finest. Some of the most famous delicacies are hoppers, red, white and black curries, milk rice and yellow rice. The cuisine of Sri Lanka was accorded pride of place in a book intitled « Leith’s Book of Indian and Sri Lankan Cooking ». The island that separates Sri Lanka from India has a distinctive culture, history and social traditions which are reflected in the food habits of the islanders as well. Every tourist is able to notice that Sri Lankan food is totally different from Indian food. Even though Sri Lanka has a close relationship with India, both geographically and historically, Sri Lankan food is a distinctive culinary style; it embodies the influences of Moorish traders, Dutch, Portuguese and British rulers.

Sri Lanka has been famous for its spices from historical times. The most fragrant spices which grow in this region are cardamoms, cinnamon, cloves, or nutmeg. From the very beginning, Sri Lankan beaches which stretch over hundreds of miles are lined with coconut plantations and palm trees. Coconot kernel provides a milky liquid which is coconut milk in which curries are cooked.

The Sri Lankan cuisine is extremely wide and it gained recognition due to the Portuguese, British and Dutch invaders, Arab, Indian, Malay and Moor traders. The main Sri Lankan dish is rice and it is usually served with vegetable curries, Beef, fish, Chicken, egg and mallum. Vegetarian curries are made from fruit or vegetable like brinjals, carrot, beetroot, beans, pumpkin, ash plantains, or banana flower. Sri Lankan curries are much hotter than those in India and made with chilli powder, cinnamon, fresh chillies, curry powder, curry leaves, tumenic, garlic, onions, ginger and coconut milk.

Sri Lankan people prepare fish according to a wide variety of recipes; however, ‘Ambul Thiyal’ is the most famous fish curry which can be found especially in the southern part. There are some unique Sri Lankan specialities such as hoppers, which people usually serve for breakfast or lunch. There are several varieties of hoppers like egg hoppers, milk hoppers, or string hoppers. After meal, Sri Lankan people have pittu, which is a mixture of flour and grated coconut steamed in a bamboo tube. Another popular Dutch dish is lamprais, which is rice boiled in beef stock and added to meat and vegetables. Like every cuisine of this world, Sri Lankan cuisine has its own secrets, as well. Thus, baking the rice in banana leaves gives an extraordinary flavour to the rice. Then, Sri Lankan people say that the best way to enjoy their food is eating with your fingers.

All the communities have adopted rice as the staple food. Usually, the midday meal is rice and curry and for such a meal, everything is put on the table at once: fish, rice, meat curries, soup, and vegetables. Desserts are unknown except on different festive occasions. Another rule seems to be the fact that almost every meal ends with mangoes, pawpaws, bananas, mangosteens, rambutan, avocados, and watermelon. Every meal has to contain curries, which are always classified in accordance with the type of spicing, or the method of cooking; they can be red, white, or black. Red curries are based on few spices and a large amount of chili powder or ground chilies. White curries contain coconut milk and there is no doubt that they are usually mild and have a lot of liquid. Finally, black curries proved to be the most mypical in Sri Lanka; their dark colour is given by the coriander, fennel and cumin.

In Africa, there are not so many persons who use special equipment in the process of preparing different delicious dishes. This is mainly because they do not use complicated methods in order to cook or prepare a special kind of food. Everything is as natural as it can be, especially because Sri Lankan cuisine is dominated by a lot of fruits and vegetables. Nevertheless, there are some influences, but it seems that Sri Lankan people really care about their traditions.

The mains equipments used in Sri Lankan cooking are :

A real feast which represents the symbol of celebrating independence is hold on the 4th of February, when everybody gathers around the table and serves hoppers, red, white and black curries, yellow rice or milk rice and many other delicacies which are unique in Sri Lanka. Traditional desserts are kiri pani, meaning buffalo milk curd and treacle; wattalappam, a Malay origin egg pudding with jaggary or hardened treacle; sweet meats like kevum, which is made with flour and treacle; kalu dodol, which consists of jaggery, cashew nuts and coconut milk. Sri Lanka is a place which offers you a great variety of fruit like mangoes, pineapples, papaya, watermelon, woodapple, bananas, rambuttan, or mangosteen. Of course, there is no secret that tea is also famous in Sri Lanka, being usually prepared with Sugar and milk. Nevertheless, it can be consumed only with sugar and in this case it is called ‘plain tea’ and it has a special flavour if it is added a piece of crushed ginger.

As a matter of fact, even Sri Lankan cuisine is based on a proud oral tradition of cooking. Like in many other regions or countries, in Sri Lanka men cook more as much as women do. Some tribes like kikuyu, luo, or abaluha are known to share an important cooking tradition as they make irio, which consists of greens, beans, and corn, roasted maize, potatoes, and stewed and pureed beans. For an average Sri Lankan family, a typical meal contains sour or aged porridge made from chai or millet, which is an Indian-influenced tea brewed from black tea leaves and mixed with milk, cinnamon, cloves, Sugar, black pepper, nutmeg, and cardamom; ugali, sukuma wiki, mashed potatoes, vegetable stew, corn, and peas. In Sri Lanka, due to the fact that they cannot afford buying meat, people tend to practice vegetarianism more and more often.

It also should be taken into consideration that there is a difference between the city cuisine and the country cuisine; thus, the majority of urban areas has been influenced by various cultures such as Indian or Arabic culture. In home cooking there is a weak Western influence. On the other hand, in the country, people tend to cook and eat only traditional foods, hesitating to try foods characteristic to other cultures or tribes. Ugali and sukuma wiki are the most important traditional foods and this is the reason why they have become national dishes.

Retrieved from "https://recipes.fandom.com/wiki/Sri_Lankan_Cuisine?oldid=646921"
Community content is available under CC-BY-SA unless otherwise noted.