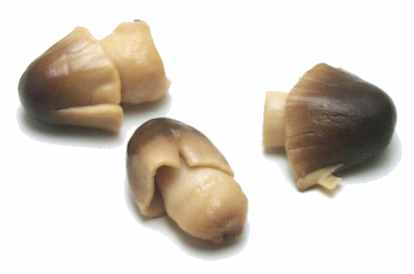 They are often available fresh in Asia, but are more frequently found in canned or dried form outside their nations of cultivation.

Popular in Asian cooking, straw mushrooms are so named because they're grown on straw that's been used in a paddy. This musty, earthy growing medium contributes its distinct nuances to this mushroom's flavor. Tiny (about 1 to 1½ inches in diameter) and coolie-shaped, straw mushrooms range in color from pale tan when young to dark charcoal gray when mature. Fresh specimens of this cultivated mushroom can sometimes be found in specialty produce markets. More readily available are canned straw mushrooms, which are found in Asian markets. Also known as paddy straw mushrooms and grass mushrooms.

Named for the beds of straw on which they grow in China, are small, plump brown mushrooms that resemble closed umbrellas and have a mild flavor and a tender texture. Also known as umbrella mushrooms, they are most often sold canned and should be rinsed before using.

Retrieved from "https://recipes.fandom.com/wiki/Straw_Mushroom?oldid=719726"
Community content is available under CC-BY-SA unless otherwise noted.