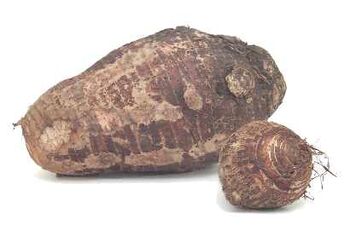 Wikipedia Article About Taro on Wikipedia

Taro (from Tahitian), more rarely kalo (from Hawaiian), is a tropical plant grown primarily as a vegetable food for its edible corm, and secondarily as a leaf vegetable. Its flowers are also eaten. Taro is closely related to Xanthosoma and Caladium, plants commonly grown as ornamentals, and like them it is sometimes loosely called elephant ear. Taro and domesticated Xanthosoma species share substantially the same uses, and several names, including callaloo and coco or cocoyam. Taro may be distinguished as "taro cocoyam" or "old cocoyam". Its scientific name is Colocasia esculenta (synonym C. antiquorum). Taro is believed to be one of the earliest cultivated plants.

Taro is a traditional staple in many tropical areas of the world, and is the base for making poi in Hawai‘i. The plant is actually inedible if ingested raw because of needle-shaped raphides in the plant cells. Severe gastrointestinal distress can occur unless the plant is properly processed first.

Taro is typically boiled, stewed, or sliced and fried as tempura. The small round variety is peeled and boiled, sold either frozen, bagged in its own liquids, or canned. In China, taro is called yù tǒu (芋头 or 芋頭; wu tao or wu tau in Cantonese) and is often used as an ingredient in niangao, a dense pudding made from glutinous rice flour mixed with mashed taro, and eaten during Chinese New Year.

Taro can be grown in paddy fields or in upland situations where watering is supplied by rainfall or by supplemental irrigation. Some varieties of taro can also be grown away from the tropics, in places such as Korea and Japan. In Korea, taro is called toran (토란) meaning "egg from earth", and the corm is stewed and the leaf stem is stir-fried. The taro corm is called sato-imo (里芋) in Japanese and supermarket varieties range from about the size and shape of a brussels sprout to longer, larger varieties the size of an adult male's fist.

A starchy, potato-like tuber with a brown, fibrous skin and gray-white (sometimes purple-tinged) flesh. Taro is grown in tropical areas and is an important starchy food in West Africa, the Caribbean and Polynesian islands. A variety of taro grown in the southern United States since the early 1900s is called dasheen. Taro roots range in length from about 5 inches to a foot or more, and can be several inches wide. Though acrid-tasting in its raw state, the root has a somewhat nutlike flavor when cooked. It's also extremely easy to digest. It should be noted, however, that some varieties are highly toxic unless thoroughly cooked. The taro root has large edible leaves (called callaloo in the Caribbean) which can be prepared and eaten like mustard or turnip greens. Taro root can be found in ethnic markets and some specialty produce stores. Choose roots that are firm and smooth and refrigerate up to 4 days. Much like the potato, the taro root may be prepared in a variety of ways including boiling, frying and baking. In Hawaii, it's used to make the famous Poi.

The taro root, as with other tubers is recognized by other names. This tuber is also known as dasheen, eddo and kalo in many areas of the world including West Africa, Asia, Central America, South America and the Caribbean and Polynesian islands. This root is most well known as the ingredient of the Hawaiian dish "poi," or mashed taro root.

Taro root is a starchy vegetable that is commonly used in place of a potato. Its hairy outer coating on its surface is similar to a coconut. The hairy outer layer is always removed with caution since skin irritation can arise caused by the juices secreted by the taro root. It is recommended to use protective rubber gloves when handling this tuber. Taro root is toxic in its raw form so always cook it before eating.

These tubers take on a nut-like flavor when cooked. Frying, baking, roasting, boiling, or steaming them as an accompaniment to meat dishes are all common uses. Soups and stews are other dishes that taro root suits well.

Select tubers that are firm, hairy, with no wrinkling. Store the roots for up to one week in a cool and dry location, making sure that the roots do not dry out.

Retrieved from "https://recipes.fandom.com/wiki/Taro?oldid=674975"
Community content is available under CC-BY-SA unless otherwise noted.