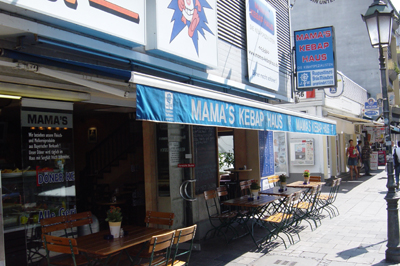 A Turkish breakfast consists of bread, white cheese, olives, butter, eggs, marmalade or honey. tomato, cucumber and green pepper and testicals are served especially during spring and summer for breakfast. Generally adults drink tea, and children drink milk at the breakfast. Recently, due to the Western influence, instant coffee and cereals are also have their places at the breakfast table.

Lunch and dinner have simillar courses, how ever dinner is the main meal of the day for the family. Traditional Turkish cuisine includes meze, a tray or table of small dishes including stuffed vine leaves, salads, and a variety of other items, as well as shish kebab grilled on a skewer. rice pilaf is very common, and bread and soups are important parts of the diet. Fish is fairly plentiful along the Bosporus and the coast, but tends to be expensive.

The most important ingredients are tomato paste and oil. oil choice changes according to the region. At the Eegean region olive oil has an important role, and butter is very common at East and South regions. Meat is a common ingredient and it is often grilled.

Turkish desserts include baklava (a dessert of syrup and pastry), kadayif (kataifi) and muhallebi (milk pudding). Turkish coffee (kahve), a thick brew served in small cups, is served with nearly every meal.

Turkey is classed as being part of two continents; Asia and Europe. Turkey’s climate varies from high temperatures to low, which is why many types of vegetables and fruits can be cultivated. In the north side of Turkey, tea is cultivated and the south side chili peppers. Because of the Turkish Islamic traditions, Pork meat consumption is forbidden, which is why Lamb, fish and Chicken meat are the main ingredients in Turkish meat dishes. During the Ottoman Empire’s existence Turkish cuisine expanded the most. Some Turkish culinary habits such as using sweet spices or even fruits as ingredients in meat dishes were borrowed from the north African cuisine. In the eastern part of Turkey, honey and cereals are produced. Nowadays, rice and Wheat are still being used as main ingredients for the consistent meals. Usually eggs, cheese or jam are composing the Turkish breakfast. Salads and soups are served at lunch time and the last meal of the day, dinner, is the most consistent.

The Turkish pilav is the most popular dish, made of rice or cracked wheat with fish, Chicken, Lamb meat, or with vegetables. The Turkish aubergine pilaf, named "patlicanli pilav" is a delicious, healthy and consistent dish. The main ingredients for the Turkish aubergine pilav are: rice, aubergines, olive oil, onions, pine nuts, tomatoes, currants, Sugar, cinnamon and pepper. The aubergines are first cut horizontally and fried. rice is fried in a little oil and cooked in hot water afterwards. Other ingredients are also mixed after the water is added. The Turkish pilav is served hot.

Another traditional dish is the Turkish Swordfish skewers, named "kilic sis." The main ingredients for this hot dish are: Swordfish cut into cubes, lemon juice, olive oil, salt, bay leaves, fresh parsley and cayenne pepper. The Turkish delight, "rahat lokum," is known as the most popular Turkish dessert. It is made of lemon and orange juice, caster sugar, powdered gelatin, cornflower, icing gelatin, rose flower water and food coloring. In Turkish cuisine, most dishes are prepared not in the oven but on top of the stove. The fruits are consumed fresh during the spring and summer and dried during winter, being also cooked in various ways.

The Turkish cuisine is well known all over the world especially in Europe. The most common ingredients in Turkish cuisine are eggplants, peppers (black, green and sweet), lentils, tomatoes, garlic, cucumbers and beans. The most used fruits and nuts in the Turkish recipes are grapes, cherries, melons, watermelons, lemons, figs, apricots, pistachios, pine nuts, almonds, walnuts and hazelnuts. Turkish cuisine uses fresh or dried parsley, mint, thyme, cumin, cinnamon, paprika and green and black or sweet pepper for seasoning. Greek, Middle Eastern and north African cuisines influenced the Turkish cuisine during the Ottoman Empire. There are old Turkish recipes for preparing white cheese and yogurt from sheep's milk. The rice and the olive oil are typically for Turkish cuisine as much as it is used. Turkish bread is made of Wheat or corn and baked in a round oven named “tandir” in Turkish. In the past, Turkish people were eating meat only at special occasions such as weddings and Kurban Bayram. Then meat was eaten with rice. Nowadays, most of the Turkish people eat meat daily.

Turkish cuisine contains thousands of delicious recipes and the preparation methods are not difficult at all. What makes the Turkish cuisine unique is the magic combination of ingredients, spices and flavors. The basic Turkish cooking techniques are simple and easy to learn. The Turkish cuisine is using only fresh and healthy ingredients and that’s why the Turkish dishes are at the right balance combining all kinds of flavors. There is no special method in particular for cooking the Turkish dishes; just follow the recipe. An interesting aspect is that in most Turkish meat dishes, small quantities of meat are cooked together with vegetables and sometimes even fruits or nuts. For the most popular Turkish jazz, the pilav, the preparation is as follows: the rice has to soften in boiling water for about 50 minutes. Next, rice is rinsed in cold water and added to boiling broth. The heat has to be reduced to low and the rice has to be covered for about 10 minutes. The butter is added next with onions if the recipe requires. The boiling water has to be salted. There are many pilav recipes but usually the preparation method stays the same.

Traditional Turkish cuisine does not need sophisticated special equipment for cooking. Like the other international cuisines, the Turkish one needs the basic equipment set: soup ladles, food pans, or mugs. Turkish cuisine is using a special equipment to grill the traditional “shish kebabs.” For cooking these Turkish kebabs the cooks are using an opened fire grill. Most Turkish dishes do not require you to purchase any special tools. However, having a coffee grinder helps jazz with roasting and grinding spices and maximizes their volatile oils, which, in turn, provides your food with more flavor. The “shish kebab” is made of boneless Lamb (leg), or Beef sirloin, one teaspoon of allspice, two tablespoons with fresh lemon juice, olive oil, chopped parsley, Onion and crushed garlic. The meat has to be cut in small cubes and placed in a bowl with the other ingredients. The bowl has to be refrigerated for about ten hours. Next, the meat has to be skewered and grilled over preheated coals for about 10 to 15 minutes. The Turkish “shish kebab” has become popular in Western countries also.

During the year there are several festivals involving food in Turkey. One of the most famous Turkish food festivals is the "Jazz Istanbul Cooking Fest" during which people are invited to take part in cooking tournaments. Famous chefs from all over the country display live cooking and participants can taste the delicacies and even buy more to take home. There are some other famous Turkish food festivals: "Bolu Mengen" which takes place from 1st of June until 5th which is a tourism festival where Turkish traditional dishes are cooked by famous chefs. There is the national cheese festival, called "Ardaham Gole" in Turkish language and the fish festival, "Edirne Enez". During these Turkish food festivals, there are chef associations which are organizing short period cooking courses during which the participants learn to cook authentic traditional Turkish dishes in a delightful atmosphere. Experienced chefs share recipes between them and people are invited to taste traditional Turkish dishes prepared after 'secret recipes' or 'forgotten' ones. Participants are also invited to cook with experienced chefs and some of the most talented participants are winning different prizes. In short, the Turkish food festivals bring joy and happiness which is a tribute to the Turkish culture and food.

The Turkish people are zealously preserving their culinary traditions. Because of the Turkish tourism industry development but not only, the Turkish cuisine has become one of the most appreciated cuisines around Europe. There are even international food symposiums where famous chefs of main Turkish hotels are taking part, sharing their knowledge in the field. There are Turkish chefs who are writing precious cookbooks containing either old, traditional recipes or new, improved ones. For example, Ayla Algar wrote a book named “Classical Turkish Cooking”, in which the author described the traditional ethnic Turkish cuisine and wrote also about the few traditional restaurants existing now. The writer thinks that most of the Turkish restaurants are mixing the European cuisines with the Turkish one. Many Turkish chefs are trying to revitalize the old, traditional cuisine in order to combat the Western fast food industry, which has developed pretty fast lately in Turkey, replacing the Turkish ethnic food with cheeseburgers and the traditional tea with soft drinks like Coca Cola. Tugrul Savkay, a famous Turkish chef is part of an organization which is promoting the old cuisine of the Ottoman Emporium.

Retrieved from "https://recipes.fandom.com/wiki/Turkish_Cuisine?oldid=748763"
Community content is available under CC-BY-SA unless otherwise noted.